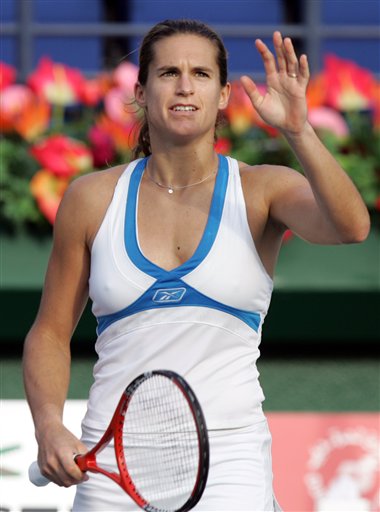 Genteel and old-fashioned Wimbledon discarded one of its longest traditions _ unequal pay. The All England Club yielded to 21st century realities Thursday, agreeing to pay women the same as men and falling in line with the other Grand Slam tournaments.

"With women and men paid on an equal scale, it demonstrates to the rest of the world that this is the right thing to do for the sport, the tournament and the world," she said.

The U.S. Open and Australian Open have paid equal prize money for years. The French Open paid the men's and women's champions the same for the first time last year, although the overall prize fund remained bigger for men.

Wimbledon will pay equal money from the first round through the final at the June 25-July 8 grass-court championships.

"I knew it was just a matter of time," defending Wimbledon champion Amelie Mauresmo said. "They resisted the longest they could. They have made the right decision and they really had no choice."

Wimbledon's prize fund will be announced in April. It will cost the club about $1.1 million to ensure equal pay, an increase funded through operating costs rather than a reduction in the overall purse.

"It's good news for all the women players, and recognizes their major contribution to Wimbledon and we also believe it will serve as a positive encouragement for women in sports," club chairman Tim Phillips said. "In short, good for tennis, good for women players and good for Wimbledon."

Wimbledon cited a combination of commercial, political and sporting factors for the decision.

"We think now is absolutely the right time to make this move," Phillips said. "We have a reputation both for the championships and for the All England Club and we have to look after that."

When Wimbledon started paying players in 1968, King won 37.5 percent of the check earned by men's champion Rod Laver. Last year, Mauresmo got $1.117 million _ 95.4 percent of the $1.170 million that Roger Federer received for winning the men's title.

The WTA Tour had lobbied for years to get Wimbledon to adopt equal pay.

"This is an historic and defining moment for women in the sport of tennis, and a significant step forward for the equality of women in our society," WTA Tour chief executive Larry Scott said.

The French Tennis Federation will discuss overall pay parity for the French Open on March 16.

The All England Club previously held out against equal prizes as a matter of principle. Phillips had cited that men play best-of-five set matches while the women play best of three. Also, some women can potentially make more money overall because they also play doubles, while the top men usually play only singles.

"I don't think that the amount of time that somebody spends on the court or the closeness of the matches is the pre-eminent factor in reaching a conclusion on this," club chief executive Ian Ritchie said. "We looked at the commercial factors very much in the past, as much as the political ones. We look at it on the whole."

Phillips said "broader social factors" played a part, noting that 55 percent of Wimbledon's spectators were women and the club will host the 2012 Olympic tennis tournament.

"The greatest tennis tournament in the world has reached an even greater height today," three-time champion Venus Williams said.