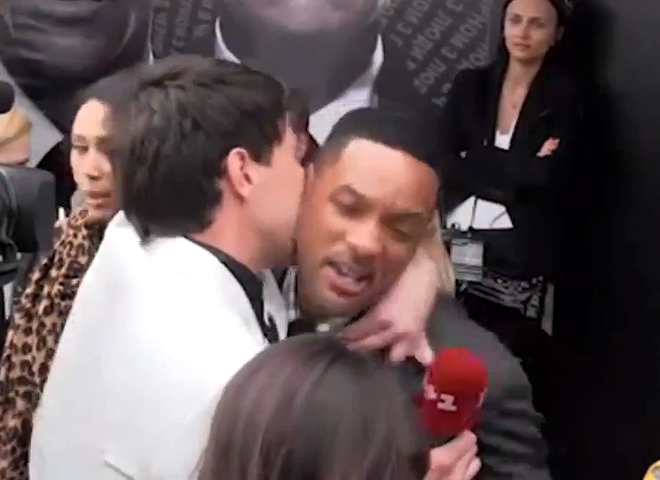 (AP) MOSCOW - Hollywood star Will Smith slapped a male television reporter who he said tried to kiss him on the lips as he walked down the red carpet for the Moscow premiere of "Men in Black 3."

The reporter from the Ukrainian television channel 1+1, Vitalii Sediuk, made headlines at the Venice Film Festival in September when he presented a bouquet of clearly unappreciated purple hydrangeas to Madonna and called her "my princess."

Smith was even less charmed by the reporter, who approached him on the carpet outside the movie theater on Friday night and tried to kiss him.

"C'mon man, what the hell is your problem, buddy?" Smith said as he pushed Serdiuk away and slapped him lightly across the cheek with the back of his left hand.

"He's lucky I didn't sucker punch him," Smith said to the crowd of journalists and fans. "Oh, I said that on camera! It's all good."

He said Serdiuk kissed him on the mouth, but it was not clear whether the reporter intended to do so or was aiming for his cheek as Smith swiveled to avoid him.

Video of the incident was posted by a Russian news site. (See player below)

Madonna rebuffed Sediuk rather ungraciously in Venice, saying: "I absolutely loathe hydrangeas." She stashed the flowers under a table before beginning a press conference.

She later made a short silent video called "Madonna's love letter to hydrangeas." The video begins with a sarcastic apology and concludes with subtitles reading "I'm left with the feeling that I still hate hydrangeas."