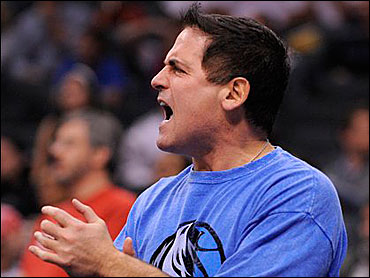 NEW YORK (CBS/AP) "Even I have no idea how the heck the BCS works," quipped 2010 Heisman Trophy winner Cam Newton on CBS' "Late Show with David Letterman" -- and he's not the only one.

Outspoken Dallas Mavericks owner Mark Cuban recently sounded off regarding the oft-debated Bowl Championship Series, which some see as a popularity contest, proposing an entirely new system with his financial backing that would encourage playoffs.

Cuban told ESPNDallas.com Wednesday that he was "actively interested but in exploratory stage" of trying to fund a 12- or 16-team playoff that would replace the controversial BCS Series.

"(The BCS is) an inefficient business where there's obviously a better way of doing it," Cuban said in the interview. "The only thing that's kept them from doing it is a lack of capital, which I can deal with."

"Given how much support our current system has among university presidents, athletics directors, coaches and athletes, I don't think any amount of financial inducement will make people abandon" the BCS, Hancock stated in an e-mail response to the AP Thursday.

Established in 1998, The Bowl Championship Series (BCS) is a selection system based on a combination of polls and computer ranking methods to determine match-ups in the five post-season bowl games, in hopes that the top two teams face-off in the BCS National Championship Game.

Top-ranked Auburn Tigers and No. 2 Oregon Ducks will go head-to-head Jan. 10 for the BCS title game in Glendale, Arizona.