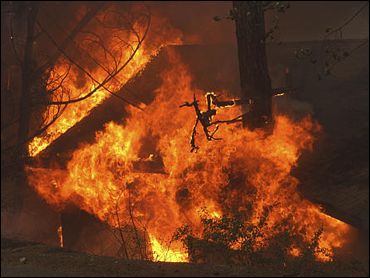 The Western wildfire season is off and running in Arizona, and there's not much firefighters can do to control a blaze that has already destroyed 250 homes.

The fire, which has grown to more than 6,300 acres, has been ravaging southern Arizona, just outside Tucson. It is now the nation's number-one fire priority, reports CBS News Correspondent Sandra Hughes.

Larry Humphrey, commander of the team battling the fire on Mount Lemmon, said firefighters are in for "a long, hard-fought contest."

"Any of our worst dreams of a place for a fire to start this time of year, this was it," says Humphrey, who estimates it could take two to three weeks to contain the blaze.

The wildfire is expected to keep charring thousands of acres, after wreaking havoc in the vacation town of Summerhaven.

Up to 1,000 firefighters are expected to be battling the blaze within a few days. But their efforts will most likely be hindered by the weather, with forecasts calling for strong wind and continued dry conditions for several days.

What remains won't be known for days or weeks when the barricades come down and the residents can go home.

Charles Hanks, evacuated to a hotel with his wife, doesn't expect to find much of his home when he returns.

"It's going to be charcoal," he says.

Others try to remain hopeful despite the odds. "You walk out crossing your fingers. You hope you're skipped over," says evacuee Jill Buckingham.

Hanks believes this all could have been avoided, because officials knew the drought-parched forest was a tinderbox.

"I don't know why the forest service did not stop people from coming up here to camp and go hiking," he says.

But officials say it's still too early to say what started this fire. So far, no injuries have been reported.

Winds up to 60 mph drove the fire through dry pine country and up the streets of Summerhaven in about an hour Thursday, reducing some homes to smoking rubble while leaving others untouched.

On Friday, firefighters moved through the community's charred streets, digging lines to protect what was left of Summerhaven — which had an estimated 700 homes and cabins and a handful of businesses before the blaze —and to defend outlying homes and transmitter towers.

Humphrey said he expects the fire, which grew from an estimated 465 acres Thursday to about 3,200 acres early Friday, to eventually burn tens of thousands of acres because there is no good place to stop it.

"We had predicted if we had a fire in the area that we would probably lose Summerhaven," he said. "So unfortunately our predictions were pretty good."
Just a year ago firefighters in Arizona battled one of the biggest blazes in American history: the half-million acre Rodeo-Chedeski fire.

"It hasn't been much of a fire season, but the western U.S. is primed to burn this summer," says Neil Hitchcock of the National Fire Information Council.

The major cause for concern is a drought, which is in its fifth year in some parts of the West. The federal government says it's the most extensive dry spell since the dustbowl days of the 1930s.

Drought conditions are worst in states along the spine of the Rocky Mountains. But much of the Western half of the country could see above normal fire activity before the season ends.

"Certainly there's a lot that can happen between now and Thanksgiving. California in particular is very dry," says Hitchock.

Making conditions even worse is a beetle infestation in California that's killed hundreds of thousands of acres of trees.

"The threat of fire is just astronomical compared to what it was and what it is now," says the U.S. Forest Service's Gene Zimmerman.