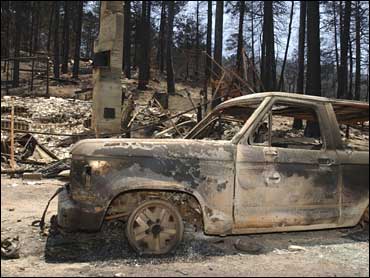 A suspected arson wildfire raging about five miles northwest of downtown Albuquerque Thursday threatened homes, a school and a shopping center. Firefighters awaited dawn to launch a "massive assault" on the ground and from the air.

Several helicopters were readied to drop water on the blaze along he banks of the Rio Grande that started Wednesday night and had already consumed some 700 acres.

"Right now we're all waiting for the morning and praying that it comes faster," Gov. Bill Richardson said. "It will be a massive assault."

All of Albuquerque's firefighters were called into duty.

"As soon as the sun comes up we'll start sending them in," said Lt. Lynn Reule. About 125 Albuquerque firefighters were on the line just after midnight Thursday; another 100 from outside agencies were poised to relieve them.

"One minute you can have it where it's all knocked down and the next minute, (it) just flares right back up," Fire Lieutenant Jim Gonzalez told CBS affiliate KRQE.

Mayor Martin Chavez said evidence suggested the wind-driven blaze that broke out at about 8:30 p.m. was not merely a flare-up of a Tuesday fire that started about a mile to the south.

"It has more than one point of origin which is suggestive of arson," Chavez said.

No arrests were immediately made.

The fierce flames and resulting thick smoke were visible in many parts of Albuquerque, a sprawling city of about 450,000. Ash fell in some areas.

"There's so much fuel, it's going in every direction," said Gonzalez. "The wind'll pick up and carry some of the hot embers and that's how you get the other spot fires. Them spot fires turn into additional and separate fires."

No injuries were reported and no structures were damaged. But hundreds of homes in an exclusive area and several other subdivisions and apartment complexes were evacuated.

"We have over 100 homes that are very severely compromised," Chavez said.

Between 200 and 250 people were evacuated from the homes Wednesday night, Chavez said. Police officers rode through neighborhoods early Thursday and announced that residents must evacuate after a shift in the wind breathed new life into the fire.

At least three evacuation centers were set up throughout the city. Some residents also were evacuating livestock to the New Mexico State Fairgrounds.

With the fire raging several hundred feet from her home, Jo Chestnut packed up family belongings and headed for a shelter while her husband stayed behind to evacuate their thoroughbred horse.

"It is very overwhelming; the thought that someone may have started this on purpose is just frightening that there is that kind of evil," she said.

Chavez said firefighters would be working strictly on structure protection and would not be fighting the fire within the area near the river — the bosque — which contains salt cedar, cottonwood trees and other vegetation.

The disadvantage Wednesday night was that the fire could not be fought from above. Water drops from helicopters were key in containing a fire that burned in the area Tuesday night.

Tuesday's fire — which also burned about 700 acres in the bosque — was apparently caused by fireworks, Chavez said. It flared north from the Interstate 40 bridge over the Rio Grande. A house under construction was destroyed and another home was damaged; no serious injuries were reported.

Meanwhile, crews in Tucson, Ariz., were digging breaks on the crucial northern and southern fronts of a wildfire that destroyed about 345 buildings last week in a mountaintop vacation hamlet.

For the first day in nearly a week, Mother Nature was kind to those trying to stop the advance of the Aspen fire Wednesday, reports CBS News Correspondent Stephan Kaufman: No heavy winds.

"This was the first time since this team arrived that we did not have red-flag warnings," said fire spokeswoman Carrie Templin. "We were able to get crews in there safely. We didn't have to worry about winds causing them to have to be pulled out."

The blaze has charred 30,200 acres, much of it pine forest, but is now 35 percent contained. The cause remained under investigation.