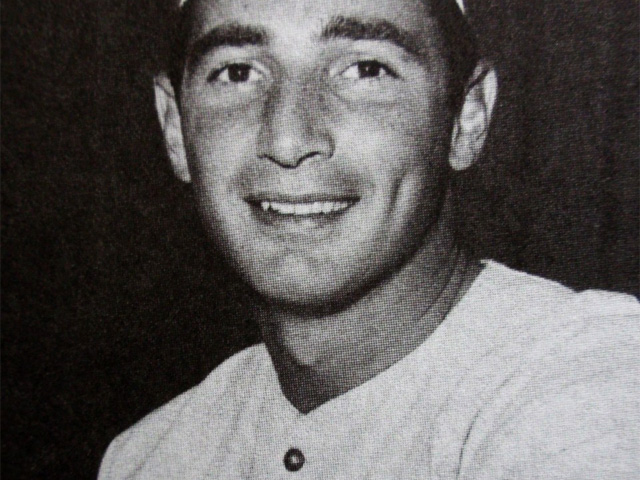 For five memorable seasons, Sandy Koufax dominated baseball as no other major league pitcher ever had before. From 1962 to 1966, Koufax led the National League in earned run average, the only pitcher ever to do that. At the same time, he compiled a record of 111-34, a winning percentage of .766, that has never been equaled. Koufax led the National League in wins, ERA, and strikeouts for three consecutive seasons. He pitched 4 no-hitters, including a perfect game. In 1963, he threw 11 shutouts, more than any other pitcher has since in one season. In 1965, he went 26-8 and set a major league record by striking out 382 batters in one season. In 1972, he was elected to Baseball's Hall of Fame, becoming Cooperstown's youngest member at the age of 36. He remains today only the second Jewish player to enter the pantheon.

Born in Brooklyn on December 30, 1935, Koufax attended Lafayette High School in Bensonhurst, where one of his friends was the television talk show host Larry King. At Lafayette, Koufax played on the basketball team, earning a reputation as one of the best players in Brooklyn. He didn't play on the baseball team until his senior year, and then usually as a first baseman who would sometimes pitch in relief of another friend, Fred Wilpon, Lafayette's pitching star and later the co-owner of the New York Mets.

Koufax won a basketball scholarship to the University of Cincinnati, where he planned to study architecture. In the spring of his freshman year, he became the overnight pitching sensation of the university's baseball team, striking out 34 batters in his first two games and gaining the attention of sportswriters and baseball scouts throughout the country. Before long, close to a dozen major league scouts, including the Brooklyn Dodgers' Al Campanis, converged on Cincinnati and offered him contracts. Accepting the Dodgers' offer of $20,000--a salary of $6,000 and a signing bonus of $14,000--Koufax left college after his freshman year for Ebbets Field.

The Dodgers owners, as Koufax biographer Jane Leavy has noted, were overjoyed, regarding "the signing of a Jewish ballplayer the way others regarded the coming of the messiah. The Dodgers were so desperate for a Jewish presence, given the demographics of Brooklyn ... Koufax was a marketing godsend." The team's owner, Walter O'Malley, proclaimed him "the great Jewish hope" of the franchise, telling a reporter: "We hope he'll be as great as Hank Greenberg."

At first, Koufax failed to meet such exalted expectations. His first few seasons were mediocre at best, a disappointment to management and fans alike. Koufax pitched in only 12 games in 1955, winning 2 and losing 2. In 1956, his second season with the Dodgers, Koufax won 2 games and lost 4. In 1957, his record was 5 and 4. Ironically, it was only after the Dodgers moved from Brooklyn to Los Angeles that Koufax began his remarkable ascent to superstardom. In August 1959, pitching against the San Francisco Giants, who had also recently moved west from New York, Koufax tied the major league record of 18 strikeouts set by Bob Feller in 1938.

With the 1962 season, his metamorphosis complete, Koufax began to make baseball history, pitching the first of his 4 no-hitters, striking out 18 batters in a game for the second time in his career, and leading the major leagues with an ERA of 2.54. In 1963, the season in which he pitched his second no-hitter, his statistics were monumental. He led the National League with 25 games won, a 1.88 ERA, and 306 strikeouts, winning the pitcher's Triple Crown. He was the unanimous winner of the Cy Young Award, as the National League's best pitcher, and was voted the National League's Most Valuable Player as well. In the 1963 World Series against the New York Yankees, during which he won two games, Koufax set a new World Series record by striking out 15 batters in one game, and was voted the World Series MVP.

For many baseball fans, Koufax's meteoric rise symbolized the coming of age of baseball in the American West. A virtual unknown when the Dodgers moved to California in 1957, Koufax, by the time of his retirement in 1966, was a household name. He had become the greatest pitcher of his era, a baseball celebrity second only perhaps to Willie Mays.

In 1965, despite arthritis in his elbow, Koufax had what many consider the best season any pitcher ever had, leading the major leagues in victories, strikeouts, complete games, innings pitched, and ERA. Then on September 9, 1965, in a game against the Chicago Cubs, he pitched his fourth no-hitter and his first perfect game. Like Willie Mays's over-the-shoulder catch during the 1954 World Series and Bobby Thomson's home run "heard round the world" three years earlier, Koufax's perfect game would become the moment for which he would be remembered.

And yet, Koufax's contribution to baseball that season cannot be measured by statistics alone. Less than a month after the perfect game, Koufax achieved, as Jane Leavy put it, "another kind of perfection by refusing to pitch the opening game of the World Series because it fell on the holiest day of the Jewish year," Yom Kippur. By refusing to pitch, "Koufax defined himself as a man of principle who placed faith above craft." Like Hank Greenberg's similar decision 31 years earlier, this became a defining moment for a new generation of American Jews, and a source of inspiration for Jewish baseball fans. Bruce Lustig, the senior rabbi at the Washington Hebrew Congregation in Washington, D.C., and a fan since childhood, has pointed to Koufax's decision not to pitch "as a transforming event, providing the catalyst" for many Jews "to acknowledge and honor their religion." Koufax's action "both reinforced Jewish pride and enhanced the sense of belonging--a feat as prodigious as any he had accomplished on the baseball field."

So, too, his successful joint salary holdout with his teammate Don Drysdale, in their 1966 preseason contract negotiations with the Dodgers, as several baseball historians have pointed out, was a "transforming event" that paved the way for Marvin Miller's challenge to the reserve clause and the beginning of free agency. In hiring an attorney to bargain for them and in demanding contracts of more than $100,000 annually--a salary ceiling no player had ever exceeded--Koufax believed they were fighting for a basic principle: "That ballplayers aren't slaves, that we have a right to negotiate."

The Dodgers gave in to Koufax's contract demands, and in 1966 he earned $135,000, the highest salary ever paid a baseball player. That was his last season, and he won 27 games, with a phenomenal 1.73 ERA, and received his third unanimous Cy Young Award, despite the fact that the chronic arthritic condition in his pitching arm that had afflicted him through much of his pitching career had worsened. At season's end, in constant pain and warned by physicians that if he continued pitching he might lose the use of his left arm, Koufax shocked the baseball world with his announcement that he was retiring at the age of 30.

Today, 45 years after his retirement at the top of his career, Sandy Koufax should be remembered as the last of the greatest pitchers of baseball's golden age. Now 75, Koufax should also be admired for his refusal to pitch on Yom Kippur and his role in winning the right of a baseball player to negotiate over salary--achievements off the field that have done much to shape his enduring legacy.

Bio: David G. Dalin, a rabbi and a professor at Ave Maria University in Florida, is the coauthor (with Jonathan D. Sarna) of Religion and State in the American Jewish Experience. The opinions expressed in this commentary are solely those of the author.