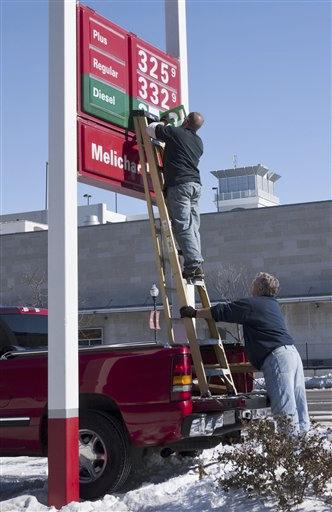 WASHINGTON (AP) - Wholesale prices outside of the volatile food and energy categories rose at the fastest pace in more than two years last month, a sign inflation could be rising as the economy strengthens.

The increase comes after months of rising prices for oil, cotton, corn, wheat and other commodities. Some economists said today's report indicates that companies are starting to pass on those costs to retailers. That's likely to increase prices for consumers later this year.

"This is a warning sign that we are going to see an acceleration of consumer price inflation" over the next six months, said Carl Riccadonna, an economist at Deutsche Bank.

The Producer Price Index, which measures price changes before they reach the consumer, increased 0.8 percent last month, the Labor Department said Wednesday. A 6.9 percent jump in gas prices pushed the index up. Food prices rose only 0.3 percent, less than many economists forecast.

The core index, which strips out food and energy costs, rose 0.5 percent - the largest monthly gain since October 2008. Economists pay more attention to core prices because they offer a better glimpse of broader inflationary trends.

About 40 percent of the rise in the core index stemmed from higher pharmaceutical prices, which jumped 1.4 percent. That's the largest increase for that category in nearly three years.

The government on Thursday releases the January report on consumer prices. Inflation at the consumer level was tame throughout 2010, but prices are expected to tick up this year.

Federal Reserve Chairman Ben Bernanke last week downplayed the risk of inflation to the U.S. economy in testimony before a congressional committee, noting that it remains "quite low."

Many Republicans in Congress worry that the Fed's efforts to stimulate the economy could lead to higher inflation. The central bank has lowered its benchmark interest rate to nearly zero, and is also buying $600 billion in government debt in an effort to keep longer-term interest rates low.

Separately, factories produced more goods for the fifth straight month in January as strong auto sales spurred demand for new cars and trucks, the Federal Reserve reported. But overall industrial production fell for the first time in 19 months as utility output declined after a weather-related peak in December.

And home construction rose at the fastest rate in 20 months, the Commerce Department said in another report. But the 14.6 percent increase was pushed up by a spike in volatile apartment building. Construction of single-family homes, which makes up nearly 70 percent of the market, declined - a sign of further weakness in the housing market.

The pace of construction rose to a seasonally adjusted 596,000 - still well below the 1 million units per year that most economists consider healthy.

Economists forecast that inflation will average 1.8 percent this year, according to an Associated Press survey of 42 economists last month.

But they started to spend at faster clip as the year drew to a close. Consumer spending rose 4.4 percent in the October-December quarter, the fastest pace since 2006.

That's helping accelerate economic growth, which rose to 3.2 percent in the final three months of last year. But faster growth and higher demand may also push up prices for many goods. Rapid growth overseas is also driving up agricultural commodity prices.