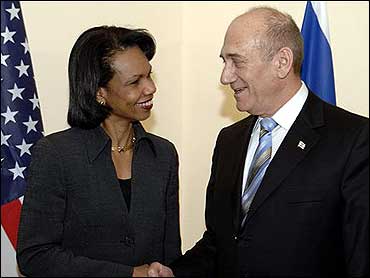 This column was written by Tom Engelhardt.


Ever since September 2001, the President's central operative image has been "war" — specifically, his "global war on terror" (promptly transformed into the grim acronym GWOT). With it went the fantasy that we had been plunged into the modern equivalent of World War II with — as George loved to put it — "theaters" of operation and "fronts" on a global scale. Remember how, as we occupied Baghdad in April 2003, administration pronouncements almost made it seem as though we were occupying Tokyo or Berlin, 1945? And when things went badly in Iraq, that country quickly became "the central front in the war on terror" in the President's speeches. Well, now it may indeed be just that.

In the framework — essentially a fundamentalist religion — of global force and "preventive" war adopted by the Bush administration, the only place for diplomats was assumedly on the sidelines, holding the pens, as the enemy surrendered to the military. (Too bad, when we hit Baghdad, there was no one around to surrender, no way to put a John Hancock on our "victory.") Otherwise, as classically happened in Iraq, where the State Department, despite copious planning for the postwar moment, was cut out of the process and left in the Kuwaiti or Washingtonian dust by Donald Rumsfeld's Pentagon, all issues of diplomacy were essentially relegated to Wimp World. After all, as the infamous neocon slogan once went, "Everyone wants to go to Baghdad. Real men want to go to Tehran." And it was well known that diplomats were not "real men."

Nowhere on the planet was a diplomat worth a sou. Not surprisingly, then, the two central figures in George W. Bush's second-term diplomatic non-endeavors became his two key female enablers, Condoleezza Rice, now secretary of state, and Karen Hughes, now undersecretary for public diplomacy and public affairs. Not surprisingly, Rice has managed to do nothing of significance on our planet — even the great diplomatic "success" of this administration, its shaky deal with North Korea, was basically crafted by the Chinese on terms worse than could have been obtained years earlier — and Hughes, as diplomacy's spinmeister, has managed to put less than no polish on our globally disastrous image.

By now, of course, we've arrived at a moment in the Middle East so grim, so fraught with dangers, so at the edge of who knows what, with so many disparate crises merging, that it's even occurred to Rice something must be done. As Tony Karon, senior editor at Time.com, and the creator of the Rootless Cosmopolitan blog points out, Rice has so far gotten a "free ride" here. Her approval ratings, until recently, hovered well above 50%, while the President's were sinking close to 30%. Now, there's desperate work to be done, and while the Saudis gear up, denouncing the "illegitimate foreign occupation" of Iraq, cancelling state dinners at the White House, consorting with the Iranians, and attempting to broker a deal between the Israelis and the Palestinians, Rice (and the U.S. media) remain mired what Karon calls a "fantasy" version of diplomacy.

"They must serve up some pretty powerful Kool Aid in the press room down at Foggy Bottom," he writes, "judging by U.S. media coverage of Condi Rice's latest 'Look Busy' tour of the Middle East." Don't expect results.
By Tom Engelhardt
Reprinted with permission from the The Nation