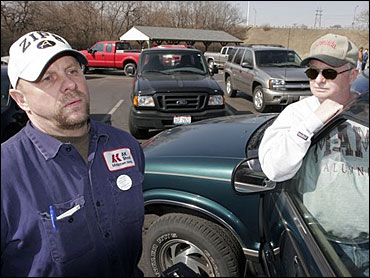 "I feel there are a lot of things going on in his mind," Yankees manager Joe Torre said after Pettitte was hit hard in Wednesday night's 11-3 loss to the Chicago White Sox. "The deadline passing will help. I'm not saying it's the problem, but that's what I see from the side."

Pettitte (7-8) denied he was preoccupied with a possible deal.

"It never entered my mind," he said. "I was making poor decisions out there. My mechanics were really off. I don't even want to talk about it. Whatever happens, happens."

Ordonez didn't have much to say about his homers either. The right fielder, who had two home runs Tuesday night, hit his 24th off Dan Naulty leading off the fifth. He has been playing with a sore right hand the last two weeks and has skipped batting practice the last two days.

Does it hurt when he homers?

Durham hit a two-run shot later in the inning and added an RBI triple in the seventh for the White Sox, who won for only the fifth time in their last 16 games.

Pettitte's loss was the first by a Yankees starter in 11 games. He gave up three runs and eight hits in his shortest outing since he went 2 2-3 innings on June 2.

Pettitte seemed to use bad judgment on his pitch selection, Torre said. After getting two strikes on Chris Singleton in the fourth with curveballs, Pettitte opted for a sidearm slider that Singleton hit for an RBI single.

"At the last second I changed," said Pettitte, unable to explain why he switched in the middle of his windup. "It's crazy. It was a struggle all night."

AL batting leader Derek Jeter, who on Tuesday was held hitless for only the 11th time this season, went 2-for-4 to raise his average to .370.

Carlos Castillo (1-0), called up from Triple-A Charlotte on Tuesday, picked up the win with five innings of one-run relief.

"That was a great performance," White Sox manager Jerry Manuel said. "Carlos is a guy we knew could pitch."

"I finally got a chance and I'm glad I could contribute to a win," Castillo said.

Chicago starter Jim Parque left because of a bruised left thumb after Luis Sojo's single deflected off his left hand in the fourth. Parque finished the inning and X-rays were negative. Manuel said he did not expect Parque to miss a start.

Konerko hit an RBI triple and scored on Wilson's single to give Chicago a 2-0 lead in the second.

Scott Brosius made it 2-1 with his 11th homer in the third. Girardi hit a two-out, RBI single with the bases loaded in the fourth to tie it at 2.

Singleton's RBI single in the fourth gave Chicago a 3-2 lead and chased Pettitte. But Naulty got Frank Thomas to ground into a double play to end the inning.

The White Sox batted around in the fifth. After Ordonez's homer, Wilson hit an RBI double and Caruso had a two-run single to make it 7-2. Durham then connected for his 12th homer, chasing Naulty.

"The big hit was Wilson's double down the right field line," Manuel said. "That ball has gone foul for us lately. At least we felt like something had gone our way."