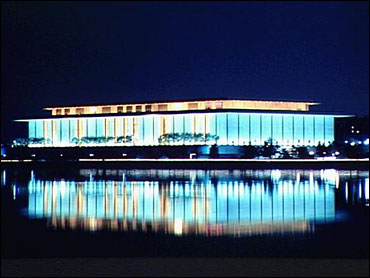 Most of us like our names or at least we're so used to them, they don't bother us much, but it must be strange to have something like a bridge, a ballpark or even just a street with your name on it.

Of all our 43 Presidents, Washington, Lincoln and Roosevelt have had the most things named after them. Washington has his name on nine colleges and 121 towns in this country. He's the only one who has a State with his name on it. Washington is all over. Lots of Lincolns, too. Roosevelt is everywhere.

Of modern Presidents, Kennedy is the most frequently used name.

The names of some Presidents are hard to find on anything. Calvin Coolidge is scarce. You don't see many Trumans. I don't think I've ever seen a Richard Nixon anything.

It'll be interesting to see how George W. Bush does. You can find a street somewhere named for almost every one of our presidents though.

Ball Parks often have someone's name. Wrigley Field in Chicago is one of the best-known. The Houston Astros got paid to call their ballpark Enron Field. They dropped it when Enron got caught stealing and Coca Cola paid them $100 million to have it renamed Minute Maid Park. I don't know why it isn't just Coke Park.

It's common for rich people to give money for things like hospitals and they get their name on it out front. Steven Spielberg Pediatric Research Center, The Paul H. Leffman Education Center. It's good.

In Albany, New York, the airport is called the Albany International Airport. I think it has two flights a week to Canada. I grew up in Albany. Maybe I'll offer them $1.50 to rename it the Andrew A. Rooney Not Far Afield.
By Andy Rooney