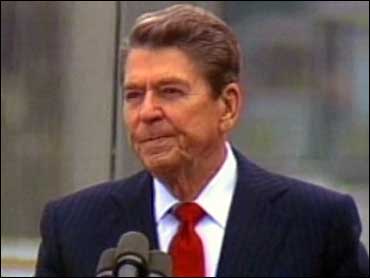 "My hero Ronald Reagan ..." were the very first words of a recent fund-raising pitch e-mail from former New York City mayor Rudy Giuliani. He went on to not-at-all-subtly quote our 40th president — "The future belongs to the free" — and commented: "This statement captures what so many Americans admired about President Reagan — his optimistic leadership, his belief in building a better future, and his continued focus on freedom."

Why does every Republican presidential candidate want to be the next Reagan? And why is Ronald Reagan exactly what conservatives seem to be craving most?

Paul Kengor, author of "The Crusader: Ronald Reagan and the Fall of Communism," says "Reagan was able to unify and uplift the party ... (largely) through three essential dynamics that George W. Bush does not possess and which all contenders for 2008 and beyond will find frustratingly elusive: communication, personality and a single winning issue he pursued with tremendous success."

Reagan's magic was his skill for communication, the same communication George W. Bush, despite all his brave leadership on Iraq, lacks. As Kengor vents to me, he channels the frustrations of many conservative supporters of the Iraq war: "This administration seems almost afraid to respond to its harshest critics, as if fearful it will offend the New York Times. There seems to be a complete inability by the president's staff to create helpful images for their president."

Think about this one as an example: The most frequent dismissive comment directed at Bush is that he's a "cowboy." Kengor recalls: "I always expected the Bush team to play up the Texas-ranch-cowboy imagery of George W. Bush. They never have. I understand why: The Left would call the president a gunslinger and cowboy in a pejorative way. Who cares? Most Americans love cowboys, they love the Old West. Who cares if Dana Milbank and the Washington Post don't? The liberal press will not like Bush no matter what he does. Reagan wasn't afraid of that cowboy image. He played it up. He spent a full year's worth of time at his ranch while he was president, where he wore cowboy boots, Wranglers, flannel shirts, a Stetson, rode horses, split wood and slept literally 10 feet from a gun rack filled with Winchesters, one of which he grabbed one day and fired at a crow, to the horror of the Secret Service." Of course, Reagan ended a Cold War and restored a nation's confidence.

If you want to be a Reaganesque candidate, Kengor suggests that you "be positive" and "persevere": "Reagan was positive in his image of America as a Shining City. ... He saw America that way himself, and then succeeded in communicating that image to Americans. Perseverance is more difficult."

It's great to know Reagan inspired everyone. But when everyone from Republican Mike Huckabee to Democrat Barack Obama is praising Reagan, the winner will be the candidate who embodies the best of Reagan's character: perseverance, optimism, and authenticity.
By Kathryn Jean Lopez
Reprinted with permission from National Review Online