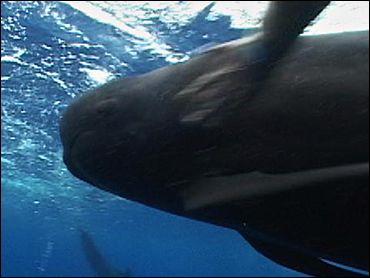 Five pilot whales that had stranded themselves in shallow water off the Florida Keys were swimming toward what scientists hope is a healthy future.

The whales, which beached nearly four months ago and were nursed to health by volunteers, were set free Sunday in the first simultaneous release of five rehabilitated whales in the United States.

They have been fitted with radio and satellite monitoring devices on their dorsal fins so marine experts can track them and collect scientific data about pilot whales.

Two vessels, the 150-foot Newfoundland Express and a shrimping boat from the Florida Panhandle, will follow the whales for two weeks.

They are equipped to capture a whale if it has problems and take it to shore, said Laura Engleby, a marine biologist for National Oceanic & Atmospheric Administration fisheries.

A team of volunteers and marine experts coaxed each of the whales onto a sling at their holding lagoon and then used a crane to lift them one at a time onto boats for their 14-mile trip to freedom.

Once at the continental shelf, where pilot whales frequently swim, the five were lowered head first into the water.

The youngest dolphin, a yearling male, started squealing as it was tipped down toward the water, said Rick Trout, director of animal care at the Marine Mammal Conservancy.

"You could just tell, this was not a distress call, this was exciting," Trout said. "This was a little kid getting excited."

As the whales swam away, dozens of people who had accompanied them on the boats cheered.

"We all cried," said Denise Jackson, stranding coordinator for the Florida Keys Marine Mammal Rescue Team. "You feel relieved they all made it out there. It's successful, it's great. But it's a very mixed emotion."

Witnesses on a helicopter later saw whales swimming and jumping through the water together. Marine officials hoped they would join a nearby pod of pilot whales spotted 27 miles off shore.

The released whales were among a group of 28 that became stranded in shallow water April 18 in the Florida Keys. It's not known why they became stranded, but marine experts say some showed signs of old age. Eight died, six were euthanized and nine were able to swim away.

The five remaining whales — four adult females and the yearling - were taken to a natural lagoon, where they recovered under the 24-hour care of about 1,000 volunteers who hand-fed them fish and held some in the water until they were strong enough to swim.