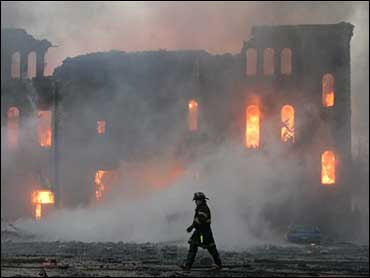 West made three 3-pointers as the Mountaineers (19-3, 9-3 Big East) handed the Panthers their fifth loss in a row.

Marcus Goree added 14 points and grabbed a career-high 15 rebounds for the Mountaineers.

The Mountaineers shut down Pittsburgh's leading scorer, Vonteego Cummings, who finished with one field goal and four free throws.

Facing a Pitt team ranked last in the conference in scoring defense, West Virginia, which leads the Big East in scoring, improved to 14-0 when scoring more than 80 points.

West Virginia frustrated the Panthers with 12 steals, including five by Owens five and four by Jones. The Mountaineers also outrebounded Pitt 42-32.

The Mountaineers, who hung on for a 76-72 win at Pittsburgh six days earlier, started the game with a 15-2 run that featured a pair of 3-pointers by West.

Pittsburgh closed within 27-25 before Jones sparked a 14-2 run as West Virginia opened a 43-32 halftime lead.