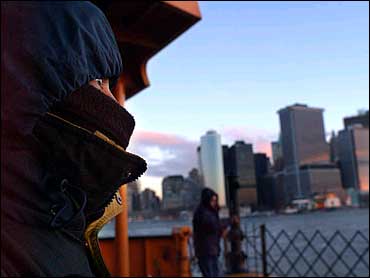 Record cold pushed power usage toward all-time highs around the Northeast on Friday, and utilities asked customers to conserve power as a precaution against blackouts.

CBS News Correspondent Jim Axelrod reports at least seven are dead from the bitter cold weather, including an 89-year-old woman who froze to death inside her home in Philadelphia.

Boston's Logan Airport hit minus 7, the coldest mark there since 1980, and water from firefighters' hoses turned to ice before temperatures began creeping up.

"This is inhuman punishment, man," said John King, stamping his feet as he stood in line for a security check outside a courthouse in White Plains, N.Y.

Temperatures warmed later in the day, as two Canadian weather systems that were funneling arctic air over New England moved eastward and began sending the bitter cold out to sea.

Wind chill warnings were downgraded to advisories, and temperatures were expected to rise into the 20s on Saturday and low 30s on Sunday for much of the region.

"We're going to leave the bitter arctic cold behind and go with just normal winter cold," said Alan Dunham, a meteorologist with the National Weather Service in Taunton.

No major blackouts had been reported by Friday afternoon.

Electricity suppliers sought voluntary cutbacks to make sure that they had enough natural gas to run their generators and that their equipment didn't go down from overuse. New Jersey Natural Gas Co. said natural gas use was 50 percent higher than normal on Thursday, and Con Edison on Thursday beat the record set just a day earlier in the New York area.

"People stay home more, turning on lights, watching television, listening to the radio or sitting at their computer," said Christ Olter, a spokesman for Con Ed. "In addition, you need electricity to power the pump that moves hot water, or the fan that blows hot air."

About 3,500 customers in Rhode Island lost power for about two hours, but it wasn't immediately clear whether cold temperatures were a factor.

The chill hampered firefighters battling a fire at the historic Old Masonic Hall in Bangor, Maine. Water from hoses froze instantly in temperatures of minus 14, encasing the building in ice up to 10 inches thick and leaving it in danger of collapse from the weight.

Police in Quincy, Mass., about 10 miles south of Boston, used the cold to their advantage, turning off the heat to flush out a suspect hiding in an attic crawl space Friday morning.

The coldest temperature measured was minus 45 on New Hampshire's Mt. Washington, at one point literally colder than the surface of Mars, reports Axelrod.

A low of 1 degree was reported overnight in New York's Central Park, matching the record for Jan. 16 set in 1893, according to Mike Silva, a National Weather Service meteorologist.

Massachusetts cities also hit record lows, with the mercury falling to 12 below zero in Worcester, and nearly 350 school districts and private schools across the state were closed Friday because of concerns about students walking to school or waiting at bus stops.