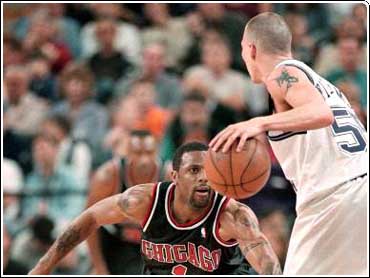 Dragging at the end of their NBA season-high eight-game road trip, the Sacramento Kings came back home and put on a high-energy scoring show.

"We wanted to be aggressors on both ends of the court," Kings coach Rick Adelman said. "And I'm really pleased with our effort."

"After the trip we had, you come back with one day of rest and you always worry about that first game back. We talked about that before the game and our guys really came out and played. If we get Thursday's game, that's 30 wins before the All-Star break, and not too many teams have 30 right now."

The 39-point victory margin was the Kings' largest this season, surpassing a 29-point win over the Golden State Warriors on Nov. 26.

"Coach mentioned at the shootaround that we can't come out lackadaisical," Webber said. "He thought it was a big game because we are better than that team. Hopefully, we'll work on winning and getting ready for the playoffs. That's what the season is all about."

Nick Anderson added 19 points, Vlade Divac had 16 and Jason Williams 13 for the Kings in winning for the 18th time in 21 home games.

"They have so many offensive weapons, they're hard to stop," the Bulls' Elton Brand said. "We just have to hold down and play our defensive schemes and we weren't tonight."

Sacramento, which leads the league in scoring, had been held to fewer than 100 points in two of its previous four games, botlosses. It went 3-5 during its just concluded 13-day road trip.

The only glitch in the win was when Anderson was hurt late in the third quarter. Chasing after a loose ball, he hurdled the scorer's table and landed awkwardly over a chair. He said he planned to play Thursday against the Denver Nuggets, though the team listed him as day to day.

"We just never got it going offensively or defensively," Chicago's Ron Artest said. "It's pretty disappointing and shocking. This is probably the worst loss of the season."

After Kukoc made a jumper and Hersey Hawkins a 3-pointer to pull the Bulls within 20 points, the Kings went on a tear, starting with a 3-pointer by Webber that triggered a 17-6 flurry during the last five minutes of the quarter.

Williams and Jon Barry also made 3-pointers in the spree and the Kings continued the emphatic offensive show by opening the fourth period with a thundering dunk by Webber off a feed from Williams.

The Kings got a 3-pointer from Predrag Stojakovic at the end of the first quarter to move in front 35-25 and stretched their lead 60-38 when Anderson made a 3-pointer with 3:36 left in the second period.

The Bulls managed to score nine of the next 11 points but still trailed 62-47 at halftime.