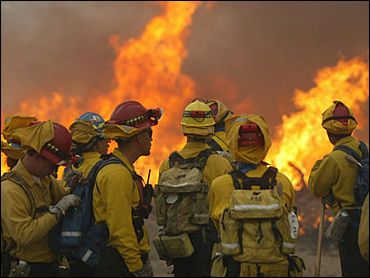 An army of firefighters, helped by higher humidity and diminishing winds, gained partial control over a wildfire that burned 14 homes and forced evacuations of hundreds of others.

"I think it's done its worst, I really think it has," said the fire incident commander, Marty Scheuerman. "Now we can do our job."

In California, meanwhile, a 10,000-acre wildfire forced 200 teenagers from two juvenile probation camps early Friday and continued to threaten rural hamlets on the edge of the Angeles National Forest. That blaze was 40 percent contained.

The 9,200-acre Carson City fire was 30 percent contained early Friday. Until the night before, Scheuerman said, "the fire had dictated to us what it was going to do, instead of us dictating to it."

"All the fuels out there are extremely dry. It wants to burn," he said.

The wind-whipped fire, with flames reaching 100 feet high, has also burned a business and 25 garages, barns and other outbuildings since it broke out before dawn Wednesday on the western edge of Nevada's capital. Five people have been injured.

"I've never seen anything like that in 36 years. I was born and raised in this town, and I've been through some fire, but not like that," said Tom Borst, who lost his home in the blaze. "You could hear the cars starting to pop and blow up."

On Thursday, the fire raged out of control through or near two northwest Carson neighborhoods with about 600 homes, but was stopped at a ridge separating the area from the Washoe Valley to the north.

All the homes had to be evacuated, and several hundred other homes and businesses were threatened by the fire, said Christie Kalkowski of the Sierra Front Interagency Dispatch Center.

The cause of the fire remains unknown but Carson City sheriff's deputies were looking for teenagers who may have been in a canyon area Tuesday night, before the fire started.

The blaze destroyed exclusive homes in the canyon and at one point burned to within half a mile of — but didn't threaten — the governor's mansion.

Firefighters were aided by more than two dozens planes and helicopters, including three heavy tankers.

Gov. Kenny Guinn said the fire hazard made it imperative for federal officials to quickly complete examinations of heavy air tankers recently grounded in nearby Minden. Once cleared to fly, he said those planes would be just minutes away. The big tankers fighting the fire flew in from distant locations to try to save homes and businesses.

"It just makes you sick," Guinn said Thursday. "You can't put a price tag on the misery these people who lost their homes will go through."

"You never think it's going to be you," said Robin Darney, who lost her home. "It's a grief I hope I will never feel again. But my children are safe."

The Angeles National Forest fire had already forced 600 people from their homes, and has destroyed at least one motor home and a building since it began Monday.

The youngsters from the two probation camps, who were convicted of nonviolent crimes, were evacuated after flames came within miles of the facilities, said Ken Kondo, spokesman for the county Probation Department.

Southwest winds blew embers along the smoldering ridgeline and expanded the fire Thursday, wiping out advances that 1,000 firefighters had made earlier in the day.

In Alaska, fire crews continued to fight 75 separate blazes, seven of them 100,000 acres or larger. One fire had spread to within 15 miles of Fairbanks and expanded to half the size of Rhode Island, blackening more than 379,000 acres.