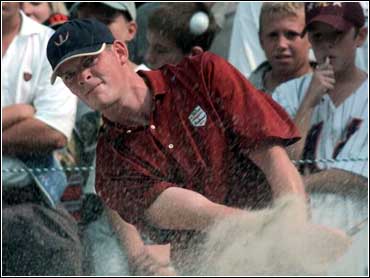 It took all day for James Driscoll to make a couple of putts in his match with Jeff Quinney. Because of that, the 100th U.S. Amateur had to wait another day to crown a champion.

Staging a comeback worthy of Tiger Woods, Driscoll won the final three holes of regulation to force a playoff with Quinney before a second threat of bad weather suspended play Sunday after 38 holes.

"I just wished we could have finished it tonight," Driscoll said. "Not because I might have had the momentum, but just to get it over with tonight would have been better."

Quinney, of Eugene, Ore., and Driscoll, of Brookline, Mass., were to resume the title match at the par-3, 193-yard 3rd hole on the Upper Course at Baltusrol Golf Club at 9 a.m. Monday. Both parred it twice Sunday.

Driscoll, whose putter had failed him repeatedly over the first 34 holes of the scheduled 36-hole championship match, made a sliding 8-footer for birdie at the 17th and then nailed a 5-footer for par at 18 to win the holes and send the match to extra holes.

The 22-year-old University of Virginia graduate said he never focused on all his near misses, knowing one more would give Quinney the championship.

"Part of me might have been thinking deep down that I was due to hole a putt, but as soon as you say that you're not going to make the putt," Driscoll said. "You have to go through the same routine and hope it works out."

"I just didn't finish the job," said Quinney, a 21-year-old who will be a senior at Arizona State. "You know I bogeyed 16 and 18, missed the fairways. I'm trying to keep my head high. I'm still in there. This is not over with."

Going to 39 holes guaranteed Quinney and Driscoll will tie the U.S. Amateur record for the longest title match. Sam Urzetta beat Frank Stranahan in 39 holes in 1950.

Going extra holes was the last thing anyone expected after Quinney, who had staged impressive comeback wins in the third round and the quarterfinals, made a short 2-footer for par at the par-3 15th to go 3-up with three to play.

However, Driscoll, turned the tables on him much to the delight of his family and relatives who shouted "Way to go James" after every big shot.

"I never really thought I had blown it because the match was never over," Driscoll said. "But I was definitely disappointed."

A bad drive and chip cost Quinney No. 16, and Driscoll won the last two holes.

Driscoll actually hit two great shots at the par-5 17th, coming out of a bunker from 50 yards to about 8 feet and making the birdie. Quinney had already been conceded a par.

For a split second, it appeared Driscoll lot the championship at the 18th when he blocked his drive right into trees with the ball coming to rest against a pine cone.

However, Quinney's drive hit a tree limb and came to rest on the edge of the fairway about 300 yards from the hole. Both reached the green in three and Driscoll tied the match by making a 5-foot par putt with ball doing a 360 around the hole before falling in.

Quinney nearly ended the match on the 37th hole when his hot shot out a greenside bunker hit the pin and stopped inches from the cup.

"He was up tight, pretty much a gimme putt," Quinney said. "I knew I had to get up and down. It was a tough shot though, one you probably get up and down five of 10 times. But it came out nicely. I thought it was going in the hole."

The players showed a lot of sportsmanship at the 38th hole, conceding short putts so neither would lose on a shot like that.

The threat of lightning had forced a 40-minute suspension earlier in the round and when the threat returned around 7:14 p.m., play was suspended for the day.

Quinney had held the lead from the first hole of the morning round until being tied at the 36th hole, in large part because Driscoll missed seven putts from 8 feet or less, including six from 5 feet or less.

When Driscoll missed a 4-footer for birdie at No. 11 and then bogeyed 14, it seemed Quinney was ready to be crowned the 100th Amateur champion.

Quinney combined a 2-under round in the morning with Driscoll's putting woes on the hilly 6,887-yard course to take a 2-up lead.

Quinney's lead reached 4-up after Driscoll bogeyed the first two holes in the afternoon, missing putts of 8 and 3 feet.

The biggest hole of the match might have been the 8th in the afternoon. Leading 3-up, Quinney three-putted for a bogey after conceding Driscoll a 2-foot bogey putt.