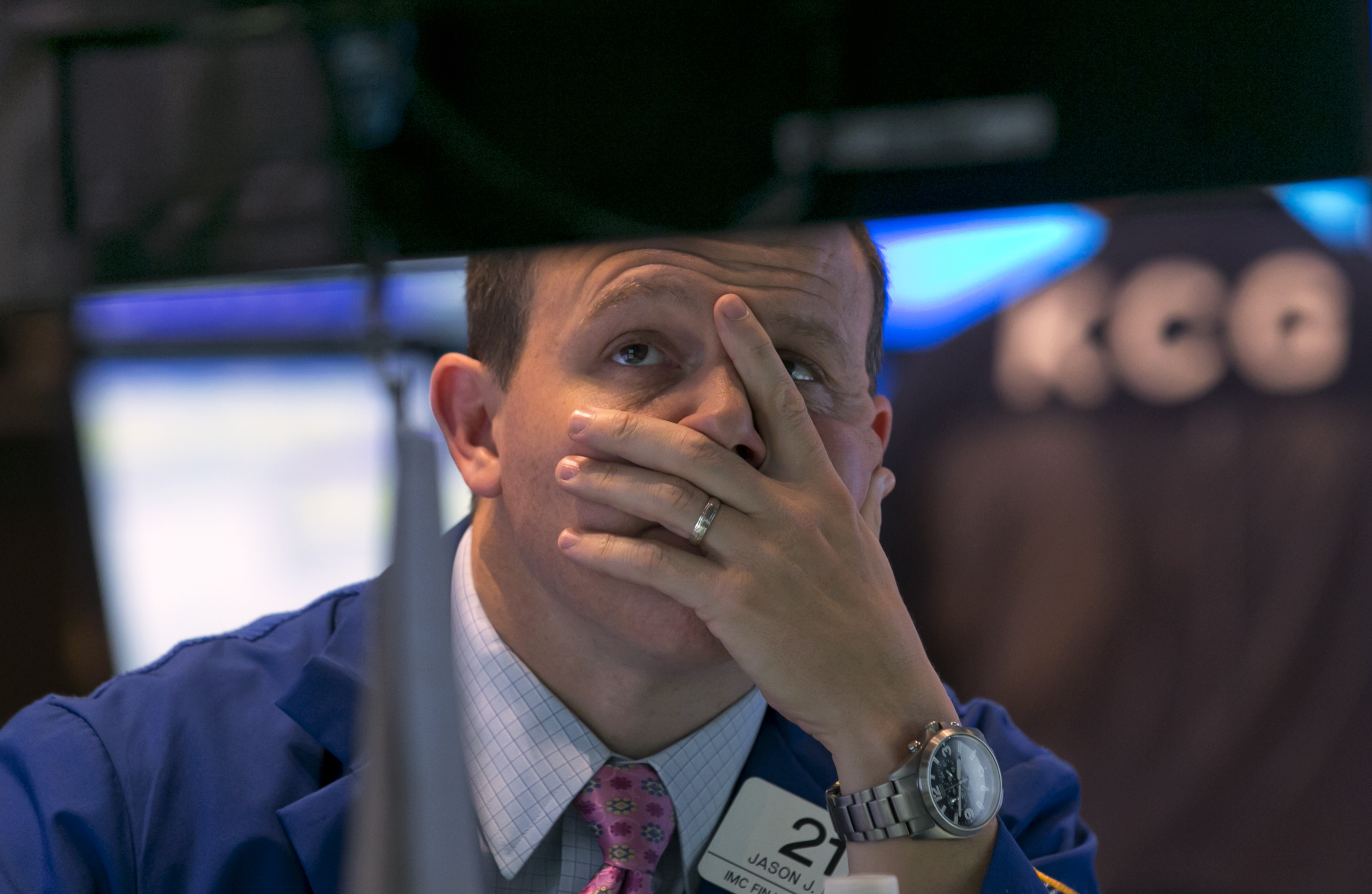 Investors avoided another roller coaster day on Wall Street Friday. Instead, they got a steady, moderate decline that left the market with its worst weekly performance since May 2012. The Dow industrial average, down 2.7 percent this week, has now given back all it gains for the year and is about 18 points lower now than when trading started in January.

Friday's drop capped a week of turbulence in the market brought on by renewed fears that economic growth in Europe could be slowing.

"Given the market's sensitivity to global growth performance," the soft eurozone data has been a key trigger point for the price action," Millan Mulraine, an analyst with TD Securities, said in a research note about the latest jitters.

Those fears were stoked on Tuesday, when the International Monetary Fund said it was lowering its global growth estimates given the mounting problems in Europe, Japan and Latin America.

That led to a 272-point drop in the Dow industrial average on Tuesday, which was a sign of the volatile week that was at hand. When the Federal Reserve released the minutes of its latest rate-setting meeting on Wednesday, stock abruptly reversed and erased Tuesday's tumble. Investors were heartened that the Fed seems set on not rushing to raise its benchmark interest rate.

But Thursday saw an even bigger reversal, as Wall Street again became anxiety-stricken over global growth and the Fed's own worries about how slowdowns overseas, coupled with an increasingly strong dollar (and more expensive U.S. exports), could rebound negatively on U.S. growth. All three major indexes closed down around 2 percent, with the Dow industrials tumbling 334 points, the index's steepest decline this year.

Then on Friday, technology shares were especially hard-hit. Semiconductor makers slumped after Microchip Technology (MCHP) cut its sales forecast for the quarter and warned investors to expect bad news from others in the sector.

That sent shares lower for Avago Technologies (AVGO), Intel (INTC) and Texas Instruments (TXN), among others. Microchip Technology declined the most, shedding $5.59, or 12.3 percent, to $39.96.

"A lot of investors are trying to come to grips with the pickup in volatility we've suddenly seen during this week," said David Kelly, chief global strategist for JPMorgan Funds.

Friday looked weak from the outset, with the major stock indexes down in premarket trading.

The slide in semiconductor stocks dragged down the tech-heavy Nasdaq composite index, keeping it in the red all day. The other indexes flirted with small gains throughout the day, but the course didn't hold. They ended lower for the fourth time in five days.

Negative economic news and a slide in oil prices contributed to the uneasiness on Wall Street this week, market watchers said.

Germany, which has been the economic powerhouse for Europe, reported on Thursday its biggest monthly drop in exports in five years. In addition, Friday afternoon, Standard & Poor's cut its outlook on France to "negative" from "stable," saying the French economy may have trouble recovering because its government may not be able to implement reforms that will lead to growth.

Meanwhile, some traders are interpreting the decline in oil prices as further indication that global growth is slowing.

"You put those three factors together, and it has investors nervous at the health of the world economy," said Jeff Kravetz, regional investment director at U.S. Bank Wealth Management.

The volatility in the market this week also came at a time of relatively light corporate news in the U.S. That changes next week, when a slew of major companies begin to report their latest quarterly results.

"Third-quarter earnings season should be pretty reassuring, and I wouldn't be surprised to see money go back into various stocks as companies surprise to the upside, which is what I expect them to do," said Kelly.

Investors did not appear to be overly optimistic on Friday. Eight of the 10 sectors in the S&P 500 fell, led by technology stocks. Utilities and consumer staples bucked the trend.

Shares in electric car maker Tesla (TSLA) slumped after investors looked over the company's late-Thursday announcement of a new all-wheel drive car. The stock lost $20.10, or 7.8 percent, to $236.91.

Despite the overall slide, some stocks posted strong gains.

Exact Sciences (EXAS) surged 35.8 percent after the company said its new colon cancer test will be covered by Medicare. Shares in the medical diagnostic test maker added $6.48 to $24.60.

The yield on the 10-year Treasury note slipped to 2.29 percent from 2.31 percent late Thursday.