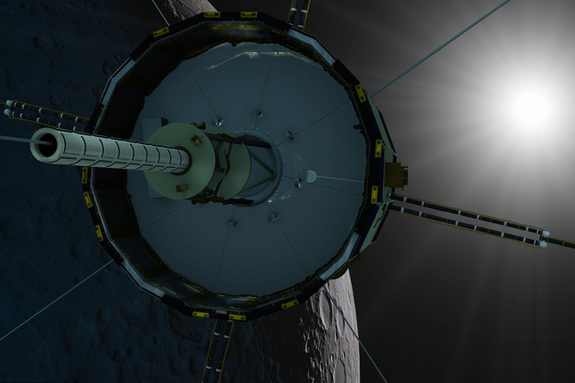 Attempts to move a vintage NASA spacecraft into a new orbit 36 years after the probe's launch are in flux, with controllers fearing the spacecraft may have run out of fuel while performing maneuvers July 9.

The vintage International Sun-Earth Explorer 3 (ISEE-3) spacecraft, now under the control of a private group, was expected to fire its engines several times Tuesday to move into a more advantageous position to communicate with Earth. The first burn went off without a hitch, but the second engine burn halted for reasons that are still being investigated.

"Our troubleshooting today eliminated some suspected causes of propulsion system problems. We do not think any of the valves are malfunctioning," Keith Cowing with the ISEE-3 Reboot Project wrote in a statement Wednesday. "Right now we think there is a chance that the nitrogen used as a pressurant for the monopropellant hydrazine propulsion system may have been depleted. That said, we still have a number of troubleshooting options yet to be explored." [See images of the ISEE-3 spacecraft]

If the spacecraft is not redirected soon, it will loop around the moon and be in an orbit that is less advantageous for communicating with Earth. But even if that scenario happens, the group plans to use it "for science in other location within the inner solar system" as at least some of the instruments are functioning, Cowing added.

The group has been diligently communicating with the spacecraft in recent weeks after receiving authorization from NASA to proceed and also raising more than $150,000 during a crowdfunding effort.

The group is controlling the spacecraft through the Arecibo Observatory in Puerto Rico and also tracking its location with NASA's Deep Space Network. The next tracking pass is expected to happen today (July 10).

"Instead of doing a near-Earth citizen science mission we will conduct an interplanetary citizen science mission," theISEE-3 recovery group wrote on Twitter Wednesday, citing the "Plan B." But in another tweet, representatives added they weren't giving up yet. "We've fixed things before using unconventional solutions."

In previous interviews, Cowing -- a co-leader on the project -- said it would be best to move the spacecraft by around the end of July, lest it use too much fuel.

The spacecraft was launched in 1978 and shut off in 1997 after chasing after comets, performing sun science and investigating cosmic rays. Tuesday's engine fires were the first course correction since 1986. The spacecraft did successfully fire the engines on July 3 for a small roll correction.