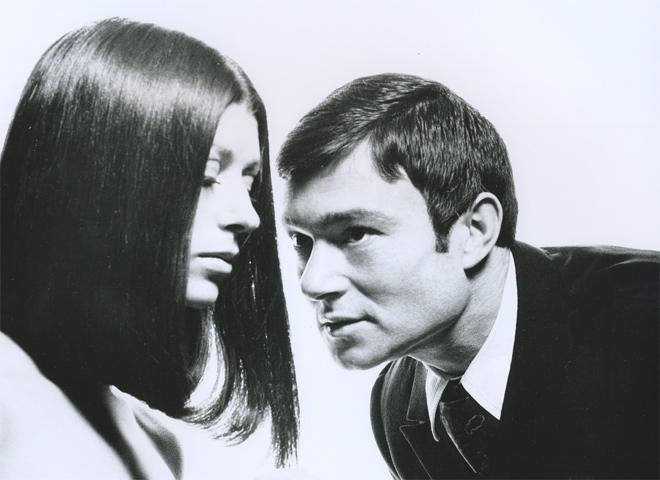 Today's he's a SHEAR GENIUS. A very long way to come for a man who started out as a shampoo boy. Tracy Smith has this Sunday Profile:

They were the Swinging Sixties, a new age in music and art, fashion and style. Heady times for a young English hairdresser who took the era, and put a crown on it.

Vidal Sassoon wanted to change the world - or at least its hair.

"I wanted everybody to have good hair," he explained. "Not just the people that could have it set once a week and combed out during the week so that they could go to the Ritz for lunch, you know? That wasn't what it was all about. It wasn't just the rich ladies' pleasure."

"It was a wash-and-wear kind of thing?" Smith asked.

"That's what they called it: 'Wash and wear,' which I found very insulting," Sassoon said. "The respect wasn't there."

The respect would come soon enough.

Sassoon built an empire out of salons, and schools, and shampoo. He appeared in commercials ("I'm Vidal Sassoon, and if you don't look good, we don't look good').

They even coined a word - "Sassooning" - which he said he likes.

What does it mean? "Nothing!" he laughed. "It meant a way of work."

"You really are arguably the first celebrity hairdresser?" asked Smith.

"I'm a crimper from way back," he replied. "We were called crimpers."

Now, this 83-year-old crimper's life story is told in a new documentary, "Vidal Sassoon: The Movie," and in his about-to-be released autobiography.

Sassoon's improbable journey began in the tenements of London's East End. He was abandoned by his father, and sent for a time to an orphanage by his mother who couldn't afford to care for him.

Still, she had a vision for her son.

"She took me by the arm and said, 'I've had the strongest premonition that you're going to be a hairdresser.,'" Sassoon said.

Young Vidal wasn't interested - he wanted to be anything but a hairdresser at that point.

"But when I walked into the salon, saw so many pretty girls and pretty clients, I thought, 'Well, we'll give this a try!'"

He started at 14 as a shampoo boy, with a thick Cockney accent. In 1954, after some speech lessons, he opened his own salon in London.

He admits it took nine years of trial and error to come up with his signature look. But Sassoon believed he - not the customer - was always right.

"We don't go for what you've always had," he'd tell a customer.

"I just wouldn't do things that I didn't think were right," he explained to Smith.

"You were that sure of your vision?"

"Yes. It's the only thing I had. I had no money, so I had to have something. So I had vision."

He took that vision from London to New York to Hollywood. When they saw his new styles, many women went mad for them. Some men simply WERE mad, finding them boyish or unflattering.

The debate even made it into film, after Sassoon famously cut Mia Farrow's hair for the 1968 hit "Rosemary's Baby."

"It's Vidal Sassoon. It's very in," Rosemary/Mia told another character, who dubbed her 'do "terrible."

What did "Rosemary" do for Sassoon's reputation? "She got me involved in Middle America," he said. "I was one of them, after Mia Farrow. Before then, I was one of these snooty fashion people."

As his popularity grew, so did the number of imitators, which he says he's OK with.

That may be because Sassoon was way ahead of the pack: He was one of the first to put his name on shampoos and hair dryers - which at their peak in the 1990s had sales of a half-billion dollars a year.

Though he's sold his businesses, they made him a wealthy man.

For all his success, his personal life has had difficulties. He says he was a terrible family man. "Dreadful. Nobody could stand me for long."

"Wife wise. My best and truly best relation is Ronnie."

He was divorced 3 times before marrying Ronnie Holbrook, his wife of 22 years. They settled in L.A., and he finally found happiness in marriage.

But he wasn't immune from tragedy: Ten years ago he lost his daughter, Catya, who overdosed on New Year's Eve.

"How do you work through something like that?" Smith asked.

His work included building homes for victims of Hurricane Katrina in New Orleans.

His honors include being named Commander of the Order of the British Empire.

"It's a great honor," he said. "You look at it from the point of view of a 14-year-old shampoo boy who couldn't really speak the language properly, suddenly is in Buckingham Palace getting medals! I mean, so it can't be too bad!" he laughed.

Last year, a bout with pneumonia nearly killed Vidal Sassoon. He says his brush with mortality was actually comforting.

"I just laid back and thought, 'You have nothing to complain about. You have had a phenomenal adventure in life.' And I have!"

"Vidal Sassoon: The Movie" is currently playing in New York and Los Angeles, and will be in additional select cities in March. The film is also available nationwide via video-on-demand. You can also follow the film via Facebook or twitter.

Lionel Richie on his "amazing ride"
Thanks for reading CBS NEWS.
Create your free account or log in
for more features.
View CBS News In
CBS News App Open
Chrome Safari Continue
Be the first to know
Get browser notifications for breaking news, live events, and exclusive reporting.