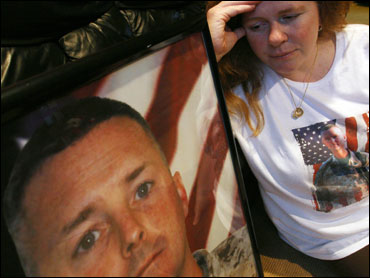 Hundreds of troops have come home from war, left the military and committed suicide.

That is the finding of preliminary Veterans Affairs Department research obtained by The Associated Press that provides the first quantitative look at the suicide toll on today's combat veterans. The ongoing research reveals that at least 283 combat veterans who left the military between the start of the war in Afghanistan on Oct. 7, 2001, and the end of 2005 took their own lives.

The numbers, while not dramatically different from society as a whole, are reminiscent of the increased suicide risk among returning soldiers in the Vietnam era.

Today's homefront suicide tally is running at least double the number of troop suicides in the war zones as thousands of men and women return with disabling injuries and mental health disorders that put them at higher risk.

A total of 147 troops have killed themselves in Iraq and Afghanistan since the wars began, according to the Defense Manpower Data Center, which tracks casualties for the Pentagon.

Add the number of returning veterans and the finding is that at least 430 of the 1.5 million troops who have fought in the two wars have killed themselves over the past six years. And that doesn't include those who committed suicide after their combat tour ended and while still in the military - a number the Pentagon says it doesn't track.

That compares with at least 4,229 U.S. military deaths overall since the wars started - 3,842 in Iraq and 387 in and around Afghanistan.

In response, the VA is ramping up suicide prevention programs.

"None of them come back without being touched a little," said Mary Gallagher, a mother of three whose husband, Marine Gunnery Sgt. James Gallagher, took his own life in 2006 inside their home at Camp Pendleton, Calif.

He was proud of his Iraq service, but she wonders whether he was bothered by the death of his captain in Iraq or an incident in which he helped rescue a soldier who was in a fire and later died. Shortly before his death, her husband was distraught over an assignment change he saw as an insult, she said.

"His death contradicts the very person he was. It's very confusing and difficult to understand," said Gallagher of Lynbrook, N.Y.

The family of another Iraq veteran who committed suicide, Jeffrey Lucey, 23, of Belchertown, Mass., filed suit against the former VA secretary, alleging that bad care at the VA was to blame.

And the family of Joshua Omvig, a 22-year-old Iraq war veteran from Grundy Center, Iowa, who also committed suicide, successfully pushed Congress to pass a bill that President Bush is expected to sign that requires the VA to improve suicide prevention care.

Suicides in Iraq have occurred since the early days of the wars, but awareness was heightened when the Army said its suicide rate in 2006 rose to 17.3 per 100,000 troops - the highest level in 26 years of record-keeping.

Just looking at the VA's early numbers, Dr. Ira Katz, the VA's deputy chief patient care service officer for mental health, said there does not appear to be an epidemic of suicides among those who served in Iraq and Afghanistan who left the military.

Katz said post-traumatic stress disorder, depression and problem drinking increase a person's suicide risk by two or three times, but the rate of suicide among those with such conditions "is still very, very low."

He acknowledged, however, that it is too early to know the long-term ramifications for those who served in the wars and said the VA "is very intensely involved in increasing suicide prevention."

The VA and Defense Department have hired more counselors and made other improvements in mental health care, including creation of a veterans suicide prevention hot line.

At the VA's national suicide hot line center based in Canandaigua, N.Y., counselors have taken more than 9,000 calls since July. Some callers are just looking for someone to talk to. Others are concerned family members. Callers who choose to give their names can opt to be met at a local VA center by a suicide prevention counselor; more than 120 callers have been rescued by emergency personnel - some after swallowing pills or with a gun nearby, according to the center.

"It's sad, but I think in the other way it's very exciting because already we've seen really sort of people being able to change their lives around because of the access to resources they've been able to get," said Jan Kemp, who oversees the call center.

Penny Coleman, whose ex-husband committed suicide after returning from Vietnam, said she doesn't buy what she calls the "we didn't expect this" mentality about suicide.

"If you'd chosen to pay attention after Vietnam you would have and should have anticipated it would happen again," said Coleman, who published a book on the subject last year: "Flashback: Posttraumatic Stress Disorder, Suicide, and the Lessons of War."

One government study of Army veterans from Vietnam found they were more likely to die from suicide than other veterans in the first five years after leaving the military, although the study found the likelihood dissipated over time. There is still heated debate, however, over the total number of suicides by Vietnam veterans; the extent to which it continues even today is unknown.

One major hurdle in stopping suicide is getting people to ask for help. From 20 percent to 50 percent of active duty troops and reservists who returned from war reported psychological problems, relationship problems, depression and symptoms of stress reactions, but most report that they have not sought help, according to a report from a military mental health task force.

"It's only when it becomes painful will someone seek counseling," said Chris Ayres, manager of the combat stress recovery program at the Wounded Warrior Project, a private veterans' assistance group based in Jacksonville, Fla. "That's usually how it happens. Nobody just walks in, because it's the hardest thing for a male, a Marine, a type-A personality figure to just go in there and say, 'Hey, I need some help.'"

While not suicidal, Ayres, 37, a former Marine captain from the Houston area who had the back of his right leg blown off in Iraq, has experienced episodes related to his post-traumatic stress disorder and said he worried about being stigmatized if he got help.

He's since learned to manage through counseling, and he's encouraging other veterans to get help.

In a study published earlier this year, researchers at Portland State University in Oregon found veterans were twice as likely to commit suicide as male nonveterans. High gun ownership rates, along with debilitating injuries and mental health disorders, were all risk factors that seemed to put the veterans at greater risk, said Mark Kaplan, one of the researchers.

While veterans from Iraq and Afghanistan were not included in the study, Kaplan said that given the nature of the injuries of the recent wars and the strain of long and repeated deployments, the newer generation of veterans could be at risk for suicide.

Kaplan said primary care physicians should ask patients whether they are veterans, and if the answer is yes, inquire about their mental health.

"This is war unlike other wars and we don't know the long-term implications and the hidden injuries of war," Kaplan said.

Dr. Dan Blazer, a professor of psychiatry at Duke University Medical Center who served this year on the military's mental health task force, said improvements in care will likely help some veterans, but he's concerned about this generation. He said he treats World War II veterans still struggling mentally with their military experience.

"There's still going to be individuals that just totally slip through all of these safety nets that we construct to try to help things in the aftermath," Blazer said.