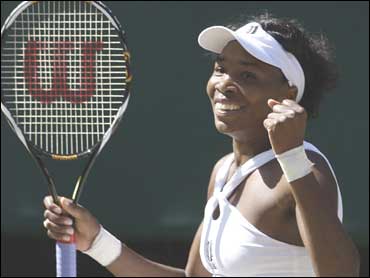 This was Venus' first victory over her younger sibling in a Grand Slam final since the 2001 U.S. Open, and it evened their career record at 8-8.

"I can't believe that it's five," Venus said. "But when you're in the final against Serena Williams, five seems too far away. ... She played so awesome, it was really a task to beat her."

Venus came from 3-1 down in the first set to turn around the match, breaking Serena four times while dropping serve twice in a final that produced breathtaking tennis despite swirling wind.

This was more than a matchup between siblings; it was a contest between two of the hardest-hitting, most athletic players in the world at the top of their game.

Venus broke to finish the match, with Serena hitting a backhand wide on the second match point. The sisters embraced at the net, and Venus kept her celebrations in check as she twirled and waved to the Centre Court crowd.

The tradition of Olympians on Wheaties boxes

Venus accepted the winner's trophy - a sterling silver salver aptly named the Venus Rosewater dish - from the Duke of Kent.

"It's so rewarding to perform here," Venus said. "Every time I come back I know I have the chance to play well and make history. My first job is big sister and I take that very seriously."

Watching from the players' box was the sisters' mother, Oracene. Their father, Richard, had flown back to the United States because he can't stand to watch his daughters play each other.

Referring to the mixed feelings of her family about who to support, Venus said, "It's hard for all of them, but I like to think they want me to win."

The 26-year-old Serena accepted her runner-up trophy and paid tribute to her 28-year-old sister.

"I'm so happy that at least one of us was able to win," Serena said. "She's played great this year. We're just glad to be in the finals again." 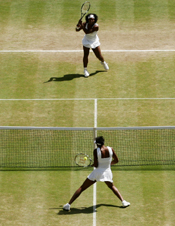 (AP Photo/Glyn Kirk)
[Left: Venus Williams, bottom, in action against her sister Serena on the Centre Court at Wimbledon.

The sisters were set to return later to Centre Court to play for the women's doubles title, joining forces to face Lisa Raymond of the U.S. and Samantha Stosur of Australia in the final.

"Serena deserves to win something, so I'll try even harder for that," said Venus, who collected a winner's check of $1.49 million.

Venus, appearing in her seventh Wimbledon final, avenged her two losses to Serena in the 2002 and 2003 title matches and stopped her sister from winning her ninth Grand Slam.

Many all-Williams finals have been awkward affairs that didn't live up to expectations, with the sisters having trouble playing their best. But this final featured long, corner-to-corner rallies, booming serves and winning shots flashing all over the court.

Both sisters struggled in the wind, with Venus repeatedly stopping to catch her service toss and rallies often disrupted by sudden gusts.

"It was so not easy," Serena said. "Every time I tried to hit a shot, the wind would blow it."

On Sunday, five-time champion Roger Federer and two-time runner-up Rafael Nadal will meet in their third consecutive final at Wimbledon.

Federer, chasing his 13th Grand Slam title, has won 65 consecutive matches on grass and 40 straight at the All England Club. He will be trying to surpass Bjorn Borg by winning a sixth straight Wimbledon title. The only man to win six in a row was Willie Renshaw in the 1880s, and he had to win only one match to defend his titles.

Nadal could become the first man since Bjorn Borg in 1980 to win the French Open and Wimbledon in the same year.