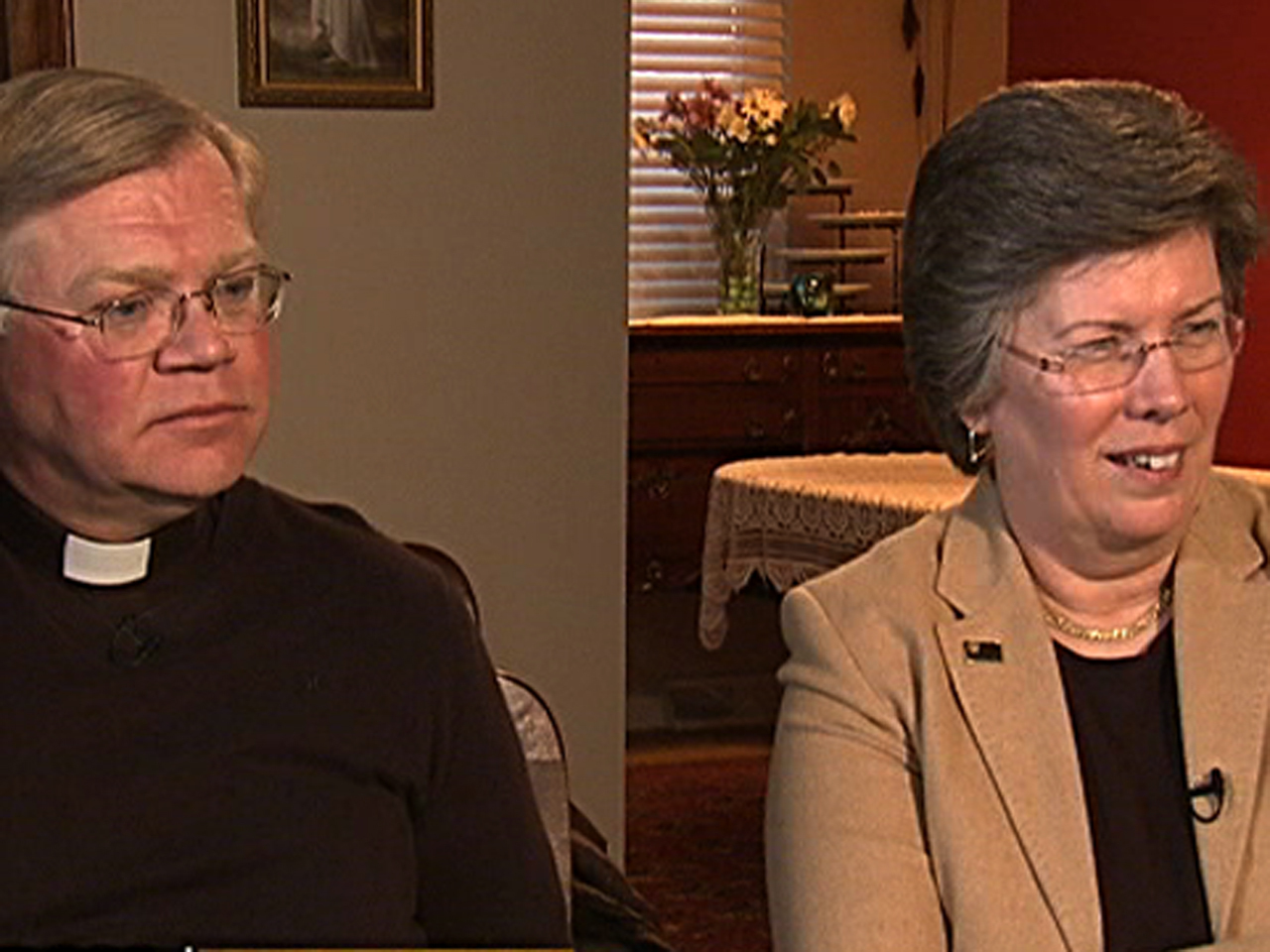 (CBS News) For centuries, the Roman Catholic Church has had a very firm rule - if you're a priest, you can't get married. But there are exceptions to the rule of celibacy.

Married for 30 years, Rev. Doug Grandon has fathered six children and enjoyed a successful career as an Episcopal pastor in the Protestant Church. But in 2003, he realized his calling was to the Catholic Church.

"The Catholic church is the fullest expression of what Jesus meant Christianity to be," Grandon said. "And I wanted to be a part of that."

Pope John Paul II issued a little known edict that said Protestant priests wishing to become Catholic shouldn't break their marriage vows. It took five years of schooling and a blessing from Pope Benedict to make Grandon one of 77 priests in the US who have converted allegiance to the Vatican.

Grandon's wife Lynn was "really angry" when he said he wanted to convert. In giving up his protestant ministry, Grandon took a considerable pay cut. The Catholic Church hasn't quite figured out how much to pay a priest with a family.

Last June, Grandon joined his new parish, the Church of the Risen Christ. The 45-year-old congregation hosts 3,200 families. Monsignor Ken Leone, the former pastor of the church, says his parish had never heard of anyone like Grandon.

"When they heard about a married priest with a wife and six kids coming, one lady said to me, 'Well, I'll never go to confessional to him. Because don't you know that husbands tell their wives everything?'"

Leone hopes that "we look at the man, we don't look at just the fact that he's married."

So, should all Catholic priests have the option to marry?

"Having married priests like us in the Latin rite allows them to look and see how it would work, if they wanted to change it," Grandon said.

Faith and religion contributor the Rev. Edward Beck told "CBS This Morning" co-hosts Gayle King and Erica Hill it's good that men like Grandon have the option to become a Catholic priest.

"It's pushing the conversation. What we're seeing is, it can work," he said. (Watch Beck's full comments, at left)

Beck, however, said he couldn't do it personally.

"I could not do what I do, in the full capacity that I do it, and be married with children. It would not work. Something would suffer."

"The idea with celibacy is you're single-minded, you're single-hearted," Beck said. "You can really give yourself to your ministry, to God, to what you do."

(Watch Michelle Miller's full report in the video above.)

Casteel hopes his new book reminds owners how vulnerable dogs can be around water, while teaching dogs to exit pools safely
Thanks for reading CBS NEWS.
Create your free account or log in
for more features.
View CBS News In
CBS News App Open
Chrome Safari Continue
Be the first to know
Get browser notifications for breaking news, live events, and exclusive reporting.