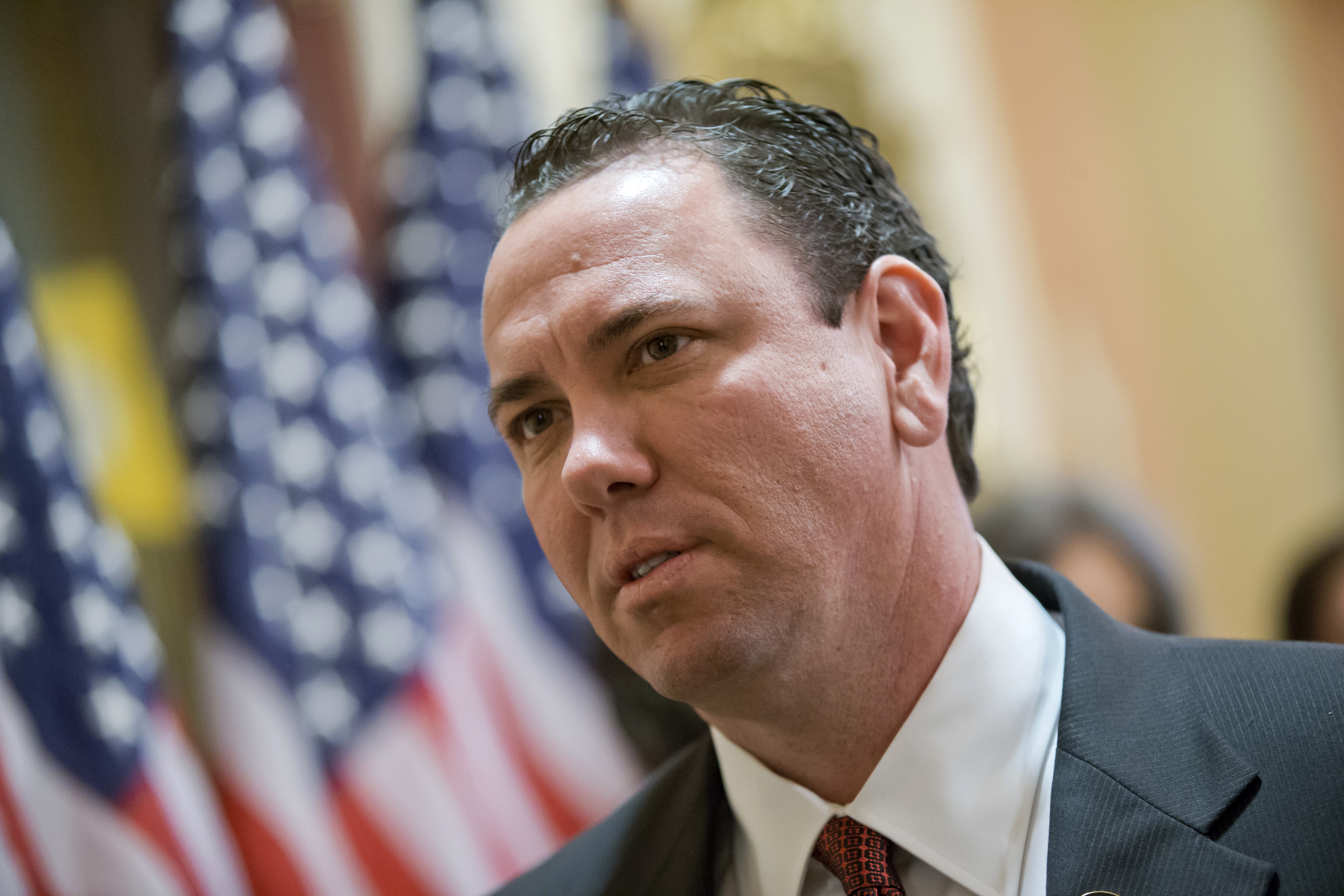 MONROE, La. -- Embattled Rep. Vance McAllister, R-La., issued a less-than-ironclad vow to stay in office Thursday as the state's Republican governor and party chairman demanded his resignation after a videotape showed him in a lingering kiss with the wife of a friend.
Gov. Bobby Jindal, R-La., called the congressman's behavior an embarrassment. "Congressman McAllister says he wants privacy to work on his issues with his family. The best way to get privacy and work on putting his family back together is to resign from Congress," Jindal said.

Meanwhile, state GOP chairman Roger Villere issued a blistering statement calling on McAllister to resign, but so far, the 40-year-old freshman congressman was rejecting the calls for him to immediately give up his seat.

"Mr. McAllister's extreme hypocrisy is an example of why ordinary people are fed up with politics. A breach of trust of this magnitude can only be rectified by an immediate resignation," Villere said.

"He has embarrassed our party, our state and the institution of Congress," the chairman continued.

Pressure has mounted on McAllister, a married father of five, since the Monday disclosure of video footage from his district headquarters.

The congressman, a conservative who highlights his Christian faith and family devotion, has found few defenders among the Republican establishment he beat to win the job in a November special election.

House Speaker John Boehner said Thursday that he has spoken with McAllister but wouldn't share the details of their conversation.

Boehner said he expects "all members to be held to the highest ethical standards, and this is no different." Of McAllister, he said, "He's got decisions that he has to make."

McAllister's spokeswoman Jennifer Dunagin said in an email, "As of now, there are no plans of resignation."

The congressman also told the Monroe News-Star earlier this week that he plans to run for re-election "unless there is an outcry for me not to serve."

But questions of whether he will stand for re-election on the Nov. 4 ballot remained unanswered after a weekly newspaper, the Ouachita Citizen, released videotape of him kissing a woman identified as Melissa Peacock. She resigned Monday from the congressional payroll.

"The congressman is not focused on re-election right now. His family is his number one priority at this time," Dunagin said.

Villere notably did not call on Sen. David Vitter, R-La., to resign when the senator's phone number was disclosed by a woman accused of running a D.C. prostitution ring in 2007.

McAllister backers, meanwhile, said they expect the congressman to fight for his family and his job. One of them, Monroe architect Bill Land, owns and shares the building where the kissing was captured on the security tape.

Land said one of his employees and one of McAllister's employees are the only people who knew the passcode required to access the digital archives. Land's employee, Lance Hilton, told The Associated Press on Wednesday that he's never accessed any old footage.

It's not known publicly how the footage made its way to the local newspaper, which said the clip was captured Dec. 23, about a month after McAllister took office.

Although reports surfaced earlier this week that McAllister might seek an FBI investigation into the source of the leaked video, his office said Wednesday that he did not plan to do so.

"Congressman McAllister's office will not pursue an FBI investigation at this time regarding the distribution of a video filmed in leased federal office space. Congressman McAllister is focused on earning back the trust of those he has disappointed, and he reiterates his request for privacy for his family during this difficult period," said a statement from his office.

Hilton and Land said they simply want to defend themselves against any claim that they are involved in the leak. A statement from McAllister's office said he will not pursue a formal investigation.

Land said he bought the eight-camera video system at the request of Alexander's staff, which wanted tighter security measures after a gunman shot and wounded Arizona Rep. Gabrielle Giffords and killed six others in 2011.

McAllister emerged from more than a dozen candidates who ran after Alexander's retirement. He financed most of his own campaign and benefited from an endorsement from the bearded men of the popular "Duck Dynasty" reality TV show.

The congressman's campaign website says he "was taught at a young age the importance of faith, family, and hard work."

In a campaign commercial, he was shown with his wife, Kelly, and their five children. "If you will trust me with your vote, you can count on me to take those values to Washington and defend our Christian way of life," he said.