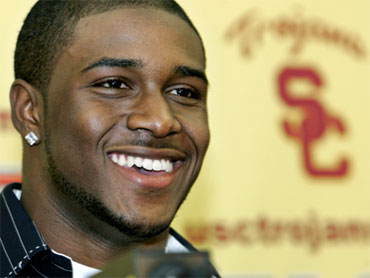 "I have a great love for the University of Southern California and I very much regret the turn that this matter has taken, not only for USC, but for the fans and players," Bush said in a statement, according to an ESPN report.

USC plans to appeal some of the penalties it believes are excessive.

"There is a systemic problem facing college athletes today: unscrupulous sports agents and sports marketers," Todd Dickey, USC's senior vice president for administration, said in a statement. "The question is how do we identify them and keep them away from our student-athletes?"

A former member of Pete Carroll's staff called the NCAA penalties "a travesty," asserting that no one at the university knew of Bush's wrongdoing, CBSSports.com Dennis Dodd reported.

The NCAA took no further action against the men's basketball team, which had already banned itself from postseason play last spring and vacated its wins from Mayo's only season with the Trojans.

The women's tennis team also was cited in the report for unauthorized phone calls made by a former player, but the NCAA accepted USC's earlier vacation of its wins between November 2006 and May 2009.

"The general campus environment surrounding the violations troubled the committee," the report said.

The report also condemned the star treatment afforded to Bush and Mayo, saying USC's oversight of its top athletes ran contrary to the fundamental principles of amateur sports.

"Elite athletes in high profile sports with obvious great future earnings potential may see themselves as something apart from other student-athletes and the general student population," the NCAA report said. "Institutions need to assure that their treatment on campus does not feed into such a perception."

USC's four-year saga reached its climax on a tumultuous day in college athletics, when Colorado's defection to the Pac-10 from the Big 12 provided the first steps in what could be a radical nationwide conference realignment threatening to change the nature of amateur sports.

The NCAA's ruling is a sharp repudiation of the Trojans' decade of stunning success under former coach Pete Carroll, when USC won seven straight Pac-10 titles — including 2004 and 2005 — and two national championships. Carroll left the school for the NFL's Seattle Seahawks in January.

While the bowl ban is the most damaging to new coach Lane Kiffin, who will have to ratchet up his formidable recruiting skills to tempt players with no hope of postseason play before 2012, USC also will lose 30 scholarships over a three-year period, 10 annually from 2011-13.

USC has long been known for its lenient admission policy at football practices, which during Carroll's tenure was open to almost anybody, from movie stars to regular fans. No longer: The NCAA also prohibited all non-university personnel, except media and a few others, from attending practices and camps — or even standing on the sidelines during games, a favorite pastime of Will Ferrell and other wealthy USC alumni.

The Trojans barely avoided further punishment that would have removed one of the sport's most popular teams from television.

"The committee seriously contemplated imposing a television ban penalty in this case," the report states. "However, after careful consideration, it ultimately decided that the penalties below adequately respond to the nature of violations and the level of institutional responsibility."

USC is the first Football Bowl Subdivision school to be banned from postseason play since Alabama served a two-year ban ending in 2003. The NCAA issued no bowl bans during the tenure of late president Myles Brand, but the NCAA reportedly regained interest in the punishment over the past year.

The Trojans have been under suspicion for years. The NCAA, the Pac-10 and even the FBI conducted investigations into the Bush family's business relationships and USC's responsibility for the culture around its marquee football team.

USC officials including Garrett and Kiffin appeared before the NCAA infractions committee in February to argue the school's ignorance of Bush's dealings.

The report also criticized "an assistant football coach" known to be running backs coach Todd McNair, putting him on a one-year "show-cause penalty" prohibiting him from recruiting, among other sanctions.

The NCAA condemned McNair's professed ignorance of Bush's dealings with sports marketers Lloyd Lake and Michael Michaels. Each sued Bush in attempts to recoup nearly $300,000 in cash and gifts they say were accepted by Bush's family during his career with the Trojans while they attempted to sign him as their company's first client.

The USC men's basketball team banned itself from postseason play last season, stripped one scholarship for last season and the upcoming season, and reduced its recruiting abilities over the next year. The Trojans also vacated their 21 victories during the 2007-08 season under former coach Tim Floyd, who was accused of giving cash to a middleman who helped steer Mayo to USC.