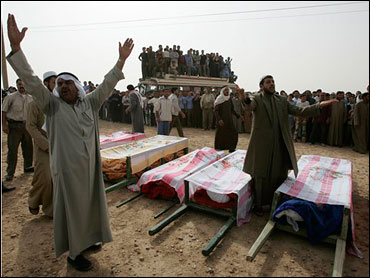 Families in this Syrian village on Monday buried relatives they said died in a U.S. helicopter attack. A U.S. counterterrorism official said American forces killed the head of a Syrian network that funneled fighters, weapons and cash into Iraq.

CBS News national security correspondent David Martin reports the raid targeted and killed Abu Ghadiyah, who was a senior al Qaeda in Iraq operative responsible for funneling foreign fighters and money into Iraq. A U.S. official calls his death "very significant." Syria was the only pipeline through which al Qaeda in Iraq was getting its foreign fighters.

Also Monday, a villager said U.S. forces grabbed two men and took them away by helicopter during the cross-border raid.

During the funerals, residents shouted anti-American slogans and carried banners reading: "Down with Bush and the American enemy." Syria's foreign minister condemned the raid as "cowboy politics."

A U.S. military official in Washington confirmed Sunday that special forces had conducted a raid in Syria that targeted the network of al Qaeda-linked foreign fighters moving through Syria into Iraq.

"We are taking matters into our own hands," the official told The Associated Press, speaking on condition of anonymity because of the political sensitivity of cross-border raids.

The attack is another sign that the United States is aggressively launching military raids across the borders of Afghanistan and Iraq to destroy insurgent sanctuaries. In Pakistan, U.S. missile strikes have killed at least two senior al Qaeda operatives this year and ramped up the threat to groups suspected of plotting attacks on Western troops in Afghanistan and terror strikes in the West.

Martin reports special operations forces went in on the ground because unlike an air strike, it allows them to pick up intelligence. They undoubtedly left with every cell phone and laptop they could find. U.S. officials do not believe they killed any innocent civilians, although that remains uncertain.

Technically, this raid, like an earlier one into Pakistan, was conducted by the CIA using military personnel, a distinction which matters only to lawyers. The Pakistan raid required presidential approval and this one likely did as well.

A Sukkariyeh resident, who spoke on condition of anonymity because he feared for his life, said he saw at least two men taken into custody by American forces and whisked away by helicopter. Another villager displayed amateur video footage he took with his mobile phone that shows four helicopters flying toward them as villagers point to the skies in alarm.

At the targeted building, about a five-minute drive off the main road, the floor was bloodstained and white tennis shoes were surrounded by blood and pieces of human flesh. A tent pitched near the site had bags of bread, pots and pans and wool blankets.

The White House Monday refused to make any comment on the incident.

"You can come up here and try to beat it out of me - but I will not be commenting on this in any way, shape or form today,' she said.

Iran condemned the attack as did Russia, which has had close ties with Syria since Soviet times.

The raid also put the Baghdad government in an awkward position while negotiating a security pact with the United States. Iraqi officials said they hoped the raid would not harm their relations with Syria, but the government spokesman in Baghdad noted that it happened in an area known as a terrorist haven.

"We are trying to contain the fallout from the incident," Iraqi Foreign Ministry undersecretary Labid Abbawi said. "It is regrettable and we are sorry it happened."

Government spokesman Ali al-Dabbagh, however, said the area where the raid occurred "is a theater of military operations where anti-Iraq terrorist activity takes place."

Syria's foreign minister, Walid al-Moallem, described the raid as "cowboy politics." He spoke to reporters in London and warned that if there was a repeat attack on Syria, "we would defend our territories."

An Associated Press journalist at the funerals in the village cemetery saw the bodies of seven men - none of them children. The discrepancy could not immediately be explained.

Sunday's attack came at a time when Syria appears to be making some amends with the United States. Though Syria has long been viewed by the U.S. as a destabilizing country in the Middle East, Damascus has been trying in recent months to change its image and end years of global seclusion.

The raid came just days after the commander of U.S. forces in western Iraq said American troops were redoubling efforts to secure the Syrian border, which he called an "uncontrolled" gateway for fighters entering Iraq.

In Sukkariyeh, villager Jumaa Ahmad al-Hamad told the AP he was walking Sunday when he saw four helicopters, two of which landed.

"Shooting then started ringing for more than 10 minutes," al-Hamad said Monday. After the helicopters stopped firing and left the area, he and other villagers went to the site and discovered the bodies of his uncle, Dawoud al-Hamad, and four of his uncle's sons, who he said were killed.

At the one-story family house of the deceased Dawoud al-Hamad and his sons, about 30 women dressed in black wept in a courtyard. They all dismissed allegations that the dead men had links to al Qaeda.

"They were innocent laborers who worked from dusk to dawn," said Abdullah's wife, Rima, while sitting on the floor. She said work at the construction site started last week.

Asked about U.S. reports that an al Qaeda-linked group used the site, Siham, the widow of one of Dawoud al-Hamad's sons, Ibrahim, said: "I don't know about any of that."

"All I know is that they went to work and never came back," said the mother of seven children, the youngest of whom is an 8-month-old girl.

Some Iraqi officials warned that the U.S. military raid into Syria could be used by opponents of the security pact under negotiation with the United States.

"Now neighboring countries have a good reason to be concerned about the continued U.S. presence in Iraq," Kurdish politician Mahmoud Othman told the AP.

Abbawi said he did not believe the Syrian raid would affect the security negotiations but acknowledged that "some will use the incident for the argument against the agreement."

Sunday's attack comes as the flow of foreign fighters into Iraq has been declining. A senior U.S. military intelligence official told the AP in July that it had been cut to an estimated 20 a month. That's a 50 percent decline from six months ago, and just a fifth of the estimated 100 foreign fighters who were infiltrating Iraq a year ago, according to the official.

The area targeted Sunday is near the Iraqi border city of Qaim, which had been a major crossing point for fighters, weapons and money coming into Iraq to fuel the Sunni insurgency.

Ninety percent of the foreign fighters enter through Syria, according to U.S. intelligence. Foreigners are some of the most deadly fighters in Iraq, trained in bomb-making and with small-arms expertise and more likely to be willing suicide bombers than Iraqis.