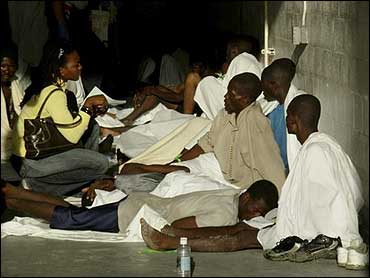 The number of Haitian migrants intercepted on their way to U.S. shores has risen, with nearly as many stopped in April as in all of last year, the Coast Guard said Monday.

More than 360 migrants brought aboard Coast Guard cutters on Friday and Saturday were returned to Haiti on Monday. Petty Officer Jennifer Johnson, a Coast Guard spokeswoman, said the boats they were traveling on were in bad condition.

"When we see a vessel that's so overloaded we have to make the decision to rescue them and take them on board our cutters," she said. Otherwise, she added, "the chances of them making it to the United States in one piece is slim."

The Coast Guard would not attribute the increase to a single cause.

Haiti has suffered through repeated coups, a brutal right-wing military regime and a bloody 2004 uprising that toppled President Jean-Bertrand Aristide.

Today, Haiti has only a few thousand police for a country of 8 million. Unemployment and despair are rife, leading thousands to flee to the United States in rickety boats each year.

While the number of migrants has been high, it is much lower than the early 1990s, when tens of thousands of Haitians fled to the United States. About 31,430 came in 1992 alone, the Coast Guard said.

Since 2004, when 3,078 Haitians were intercepted, the number had been falling.

Unlike the case of Cubans, who are generally allowed to stay once they reach U.S. soil, most Haitians who illegally make it into the United States are sent back.