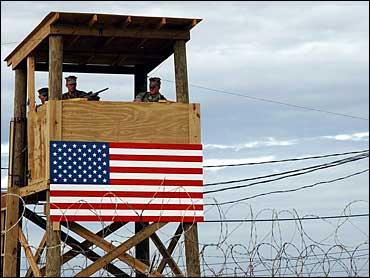 The United States will allow British detainees at Guantanamo Bay to return home only if they are prevented from engaging in terrorist activity, an American official was reported as saying Friday.

Pierre-Richard Prosper, the U.S. ambassador-at-large for war crime issues, said the nine Britons being held at the naval base in Cuba posed a serious or medium threat, The Times of London reported.

Prosper was quoted as saying they would have to be "detained and investigated, and-or prosecuted" if they came back to Britain.

"There can't be a situation where a dangerous person is released and (flies) an airplane into the next tall building around the world. That concern remains," Prosper was reported as saying.

A spokesman for the U.S. Embassy in London said The Times accurately reported Prosper's comments. He said Prosper left Britain early Friday for an undisclosed location.

The attorney for detainee Feroz Abbasi blames Home Secretary David Blunkett for holding up the release.

"David Blunkett is fearful that the public mood may change or that he will be criticized if they can't be prosecuted (in the UK)," said solicitor Louise Christian.

Prime Minister Tony Blair has said talks are under way to determine the fate of the British detainees. He said Wednesday that he would make an announcement to Parliament on the issue "shortly."

Blair's official spokesman, who declined to be named, said Friday the prisoners would either face a military tribunal in the United States or be brought back to Britain.

Asked to clarify what would happen to the detainees if they came home, the spokesman said: "Clearly, that will be an issue for the prosecuting authorities."

The Foreign Office said it couldn't comment, adding that it expected Blair's announcement to be made in the next few weeks.

Prosper told The Times each case was being examined individually.

"We are asking that they be detained and investigated, and-or prosecuted," he said. "But it is not just a blanket request we have put in.

"What makes it much more complex is that we have to have these discussions on each individual."

Christian said that shouldn't be an issue.

"The idea that the detainees could be a security risk is patently absurd," she told The Times. "They could be detained for seven days under the Terrorism Act and questioned by police in the presence of a lawyer.

Some 660 detainees from 44 countries are being held at the base in eastern Cuba on suspicion of links to the fallen Taliban regime of Afghanistan or al Qaeda terror network. U.S. officials decline to provide a breakdown of their citizenship, ages or the reasons they are being held.

Among them are some Iraqis captured in Afghanistan, Miller said, though he declined to say how many.

U.S. authorities have not charged them, and only two detainees — Salim Ahmed Hamdan of Yemen and David Hicks of Australia — have been assigned defense lawyers.

Azmat Begg, Moazzam Begg's father, told The Times he was pleased there now seems to be some movement.

"If he has done something wrong, take him to court and punish him accordingly - I am quite open about that," he said. "I am a bona fide British citizen."