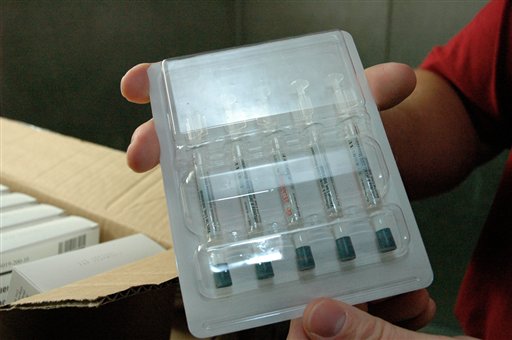 U.S. health officials have lost track of how many illnesses and deaths have been caused by the first global flu epidemic in 40 years.

And they did it on purpose.

Government doctors stopped counting swine flu cases in July, when they estimated more than 1 million were infected in this country. The number of deaths has been sitting at more than 600 since early September.

Other nations have stopped relying on lab-confirmed cases, too, and health officials say the current monitoring system is adequate. But not having specific, accurate counts of swine flu means the government doesn't have a clear picture of how hard the infection is hitting some groups of people, said Andrew Pekosz, a flu expert at Johns Hopkins University.

The novel H1N1 flu seems to be more dangerous for children, young adults, pregnant women and even the obese, according to studies based on small numbers of patients. But exactly how much more at risk those people are is hard to gauge if the overall numbers are fuzzy.

"This wasn't as critical early on, when case numbers were low," said Pekosz. But now, it's hard to say exactly how swine flu's dangers vary from group to group, he said.

The Centers for Disease Control and Prevention is relying on a patchwork system of gathering death and hospitalization numbers. Some states are reporting lab-confirmed cases. Others report illnesses that could be the new swine flu, seasonal flu or some other respiratory disease.

Some say that's a more sensible approach than only counting lab-confirmed cases. Many people who got sick never get tested, so the tally of swine flu cases was off almost from the very beginning, they say.

"It was a vast underestimate," said Dr. Zack Moore, a respiratory disease expert for the North Carolina Department of Health and Human Services.

What's more, as the initial panic of the new virus ebbed, fewer people were fully tested, so the results weren't as accurate or comprehensive. "The kinds of numbers you were getting later in the summer were different from the numbers early on," said Dr. Daniel Jernigan, deputy director of the CDC's influenza division.

That's why the CDC shifted to counting the new flu like it counts seasonal flu cases, agency officials said. "We're concerned folks are focused on the numbers and missing that influenza is monitored by looking at trends," Jernigan said.

While everyone would like an exact measure of how every disease is affecting society, that simply doesn't exist. "We don't even have a good measure of how many heart attacks there are every day," which would seem like a relatively easy thing to track, noted Marc Lipsitch, a Harvard University professor of epidemiology.

"The fact that it is a challenge to come up with these data proves that we have underdeveloped surveillance systems in this country," said Jeff Levi, executive director of Trust for America's Health, a Washington-based public health research organization.

Most disease investigation and case-counting is done by state and local health departments. But quality varies state to state, and in many places it may be getting worse: State budget shortfalls and other problems led to the elimination of 7,000 health department jobs last year and 8,000 more jobs in the first six months of this year.

"You take for granted this work goes on. But it is difficult to take for granted any longer, with these cuts going on," said Robert Pestronk, executive director of the National Association of County and City Health Officials.

However, Pestronk and others think the government's curret system of flu tracking is adequate and getting better.

The CDC has nine ways of monitoring influenza. Some focus on people who die from flu-like illness _ one tracking deaths of children, another counting pneumonia and flu deaths of all ages in 122 cities.

Other systems gather flu-testing information from labs across the country. And some rely on reports of flu-like illness from hospital emergency departments and from estimates from state and territorial health officials.

Those systems combine to give a good general picture of whether more or fewer people are going to the doctor with flu, and how often lab samples are showing swine flu as compared to other respiratory bugs, health officials say.

There are problems that make even that data incomplete or inaccurate. Rapid flu tests _ which are used in counting hospitalizations _ are often wrong when they indicate a patient doesn't have swine flu, CDC studies have shown. In some cases, flu or swine flu was only confirmed at autopsy. But most deaths are not autopsied.

These problems are not unique to the United States. The World Health Organization also stopped counting cases in July, after deciding that tracking individual swine flu cases was too overwhelming for countries where the virus was spreading widely. The WHO has continued to update swine flu reports, but with the disclaimer that since countries are no longer required to test and report cases, WHO's numbers underestimate.

Britain also releases weekly swine flu updates, but the numbers are estimates based on how many people go to their doctors with flu-like illness, as well as calls logged to the national flu service.

Despite resource limitations and data imperfections, experts say the U.S. system is good enough to alert the experts when major changes occur in the pandemic.

"There will always be an error factor, misdiagnosis, misclassifications," said Pestronk, formerly the head of a county health department in Michigan. "We'll never be at 100 percent of people getting tested. The question is what's good enough for purposes of planning and acting on the burden of disease."