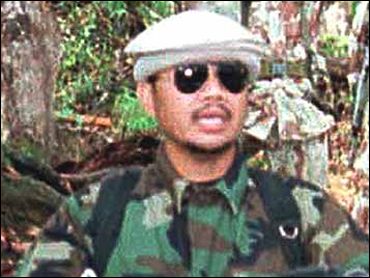 The Justice Department announced indictments Tuesday against five alleged members of the terrorist group Abu Sayyaf in the death of a kidnapped American missionary in the Philippines.

"The United States sends a signal: We will work to track down and prosecute all those who commit barbaric acts of terrorism here at home and abroad," said Deputy Attorney General Larry Thompson.

The indictments come a month after the leader of the group died at sea in a fight against U.S.-trained Philippine government forces. That man went by the name of Abu Sabaya.

Thompson announced the charges at a Justice Department news conference.

The Abu Sayyaf band has terrorized the southern Philippines with a string of kidnappings. Some of their hostages were killed, others escaped and the rest were freed, reportedly for large ransoms.

In June, American missionary Martin Burnham was killed in a military rescue mission, along with nurse Ediborah Yap and three of the guerrillas. Burnham's wife Gracia was wounded with a gunshot to the thigh. Seven soldiers also were injured.

American soldiers in the region are prohibited from engaging in combat. Bush reportedly has approved moving the U.S. force closer to the combat zone for training purposes.

Filipino officials have said the U.S. mission would end as scheduled July 31, despite the fact that many local residents have sought to extend the U.S. presence to ensure that Abu Sayyaf is wiped out and that the U.S. military infrastructure projects are completed.