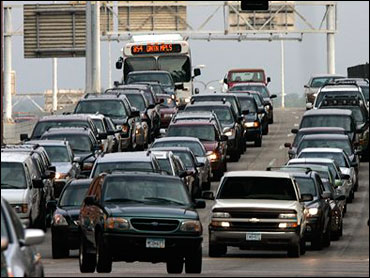 As summer vacation season kicked in, Americans got out of their cars, driving 12.2 billion fewer miles in June than the same month a year earlier.

The 4.7 percent decline, which came while gas prices were peaking, was the biggest monthly driving drop in a downward trend that began in November, the Federal Highway Administration said Wednesday.

Overall, Americans drove 53.2 billion fewer miles November through June than they did over the same eight-month period a year earlier, according to the highway agency's latest monthly report on driving. That's a larger decline than the 49.3 billion fewer miles driven by Americans over the entire decade of the 1970s, a period marked by oil embargoes and gas lines, the agency said.

Travel Industry Association spokeswoman Cathy Keefe said the June driving decline "is not surprising, given the environment that we were in." But she was optimistic that the recent drop in gas prices to below $4 a gallon in many parts of the country will have travelers on the road again.

"I think people have started to take the increase in gas prices somewhat more in stride," Keefe said. The trade association is predicting only a 1.2 percent decline in all forms of business and leisure travel this year.

Some of the biggest declines in June compared with a year ago were in such popular vacation states as Maine, down 7 percent, and Florida, down 6 percent. Western states with wide-open spaces were also part of the trend - down 7.7 percent in Montana, 6.9 percent in Washington, 6.8 percent in Wyoming, 6.7 percent in Nevada, 6.2 percent in Kansas and 6.1 percent in Alaska. Ohio saw a 4.6 percent decline.

The June driving data, collected by more than 4,000 automatic traffic recorders operated round-the-clock by state highway agencies, were supported by a telephone survey by AARP of people age 50 and over in which 67 percent said they have cut back on their driving because of high gas prices.

Four in 10 said they have used public transportation, walked or ridden a bicycle more frequently since gas prices have risen, according to the AARP poll, which was being released Wednesday.

"More Americans age 50-plus are trying to leave their cars behind but face obstacles as soon as they walk out the door, climb on their bikes or head for the bus," Ginzler said.

AARP polled 1,006 people nationally between July 9 and July 15. The poll has margin of error of plus or minus 3 percentage points.

The driving drop was not all bad, however.

"There is at least one silver lining in what's otherwise fairly painful news and that is that less driving means less air pollution and fewer global warming emissions," said Frank O'Donnell of the environmental group Clean Air Watch. Emissions from cars and trucks, along with power plants, are the top sources of air pollution, he said.