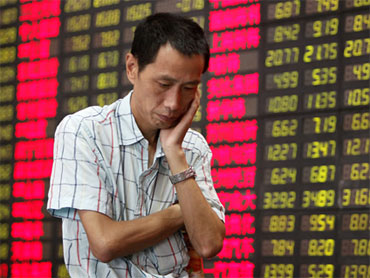 Shanghai's market led sharp declines across Asia, plummeting nearly 6 percent, as investors rushed to cash out following a recent run-up. European benchmarks were about 1 percent lower, while prices for crude and other commodities fell.

Worries about the pace of economy recovery in the U.S. were partly to blame after a key report showed Friday American consumer confidence was weaker than expected in early August. Coupled with disappointing retail sales data, the report gave investors more reason to fear growth in the world's largest economy will remain tepid for some time even once the recession technically ends.

Investors seemed little comforted by news that Japan joined Germany and France as developed economies broken free from recession. Japan, the world's second-largest economy, grew 0.9 percent in the second quarter compared to the prior quarter as export sales picked up after the country's deepest slump since World War II.

Winson Fong, managing director at SG Asset Management in Hong Kong, Asian markets - many of which have posted gains above 50 percent this year - were due for a correction. Friday's consumer report was just the excuse.

"People have been getting nervous about the markets. We're so overbought many people are moving to take profit," said Fong, who helps oversee about $2 billion in Asian equities. "We don't need to worry too much about the fundamentals for now, but in the next couple weeks we may see some more selling."

South Korea's Kospi dropped 2.8 percent in 1,565.49 and India's Sensex was down 3 percent. Markets in Taiwan, Australia and Singapore fell back over 1 percent.

Japan's return to growth - thanks to a 6.3 percent uptick in exports along with government stimulus measures - marked the end of a yearlong recession. But traders, counting on even stronger growth for the quarter, were underwhelmed.

"Investors have already expected a rise in Japan's GDP during the April-June quarter. In that sense, there were no surprisers, and investors were not impressed by the figure," said Naohiko Miyata, chief technical analyst at Mitsubishi UFJ Securities Co. Ltd.

Oil fell, with benchmark crude for September delivery losing $1.59 to $65.92 a barrel on the New York Merchantile Exchange. The contract tanked $3.01 on Friday.