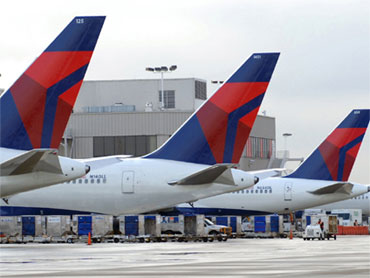 After a decade of multibillion-dollar losses, U.S. airlines appear to be on course to prosper for years to come for a simple reason: They are flying less.

By grounding planes and eliminating flights, airlines have cut costs and pushed fares higher. As the global economy rebounds, travel demand is rising and planes are as full as they've been in years.

Profit margins at big airlines are the highest in at least a decade, according to the government. The eight largest U.S. airlines are forecast to earn more than $5 billion this year and $5.6 billion in 2012.

U.S. airlines are in the midst of reporting fourth-quarter results that should cap the industry's first moneymaking year since 2007.

"The industry is in the best position - certainly in a decade - to post profitability," says Southwest Airlines CEO Gary Kelly. "The industry is much better prepared today than it was a decade ago."

The airlines' turnaround has benefited investors - the Arca airlines stock index has nearly quadrupled since March 2009 - but it's been tough on travelers.

Where Low Airfares Have Gone Online

Fares in the U.S. have risen 14 percent from a year ago, according to travel consultant Bob Harrell. Flights are more crowded than they've been in decades. On domestic flights, fewer than one in five seats are empty. Space is even tighter over the summer and holidays. That's why it took a week to rebook all the travelers who were stranded by a snowstorm that hit the Northeast over Christmas weekend.

Travelers also face fees these days for services that used to be part of the ticket price, such as checking luggage (usually $25 to $35 per bag) and rebooking on a different flight (usually $150 for a domestic flight, more when flying overseas).

"I'm not averse to anyone making money - that's great - but (to) take things away and then charge for them, that's not right," said Rick Jellow, an executive who travels in his job for a lighting-systems company in Virginia.

From 2000 through 2009, U.S. airlines lost about $60 billion and eliminated 160,000 jobs, according to an industry trade group, the Air Transport Association.

During that tumultuous decade, airlines were hit with a series of events beyond their control: two recessions; the Sept. 11, 2001, terrorist attacks; an avian flu outbreak that scared away many travelers, and rising fuel costs.

The industry was profitable in 2000, 2006 and 2007, when the economy was roaring. But those boom years masked the industry's underlying problems, including high costs and more seats than travelers demanded. During 2008 and 2009, airlines lost a combined $23 billion, but they were also attacking their problems, setting the stage for a comeback in 2010.

- They eliminated money-losing flights. When travel demand recovered, airlines could raise ticket prices for the smaller supply of seats.

- They grounded older, gas-guzzling airplanes. The government says the major U.S. airlines, plus freight delivery companies FedEx and UPS, used 11.39 billion gallons (43.11 billion liters) of jet fuel in the first nine months of 2010, down 11.4 percent from the same period a year earlier. The price of a gallon of jet fuel jumped 20 percent year over year, but overall fuel spending rose just 6 percent.

- They added fees. In the first nine months of 2010, airlines collected more than $4.3 billion from fees for checking baggage and changing tickets, up 13.5 percent from the comparable period in 2009.

Delta, Southwest, United Continental and US Airways are expected to have earned nearly $4 billion combined in 2010. The latter two report results on Wednesday. The parent of American Airlines, which suffers from higher costs than the others, said last week it lost $389 million.

The economy is expected to grow faster in 2011 and 2012 than it did in 2010, and this should give the industry a lift. But, there are some challenges on the horizon.

The biggest, is higher fuel prices. With oil hovering around $90 a barrel, jet fuel on the spot market costs about $2.60 a gallon, the highest it's been in more than two years. This will temper industrywide profit margins. Still, Soleil Securities analyst James Higgins says most airlines would make money this year even if oil hits $100.

Another factor that will determine how long the industry's profitability lasts is how individual airlines manage growth. Rightly, the airlines so far have been cautious about adding more flights as travel demand picks up. In the past, they added flights and brought back grounded aircraft too quickly. That led to a glut of seats and falling airfares.

"The wild card is always capacity discipline," says William Swelbar, a director at Hawaiian Airlines' parent and an airline industry researcher at MIT. "All it takes is one carrier to begin to add capacity aggressively, and then we follow and we undo all the good work that's been done."