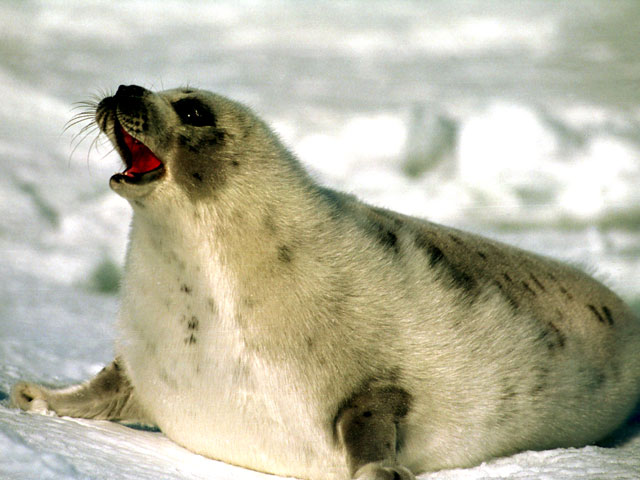 PORTLAND, Maine - Harp seals from Canada are showing up in U.S. waters in greater numbers and farther south than usual, and biologists want to know why.

Small numbers of juvenile harp seals are typically found each winter stranded along the coast of the northeastern United States. But this year, well over 100 adult harp seals - not juveniles - have been spotted, said Mendy Garron, regional marine mammal stranding coordinator for the National Oceanic and Atmospheric Administration in Gloucester, Massachusetts. The sightings are reported by 14 seal stranding and rehabilitation organizations in New England and the Middle Atlantic states.

"In some areas they're reporting three times the normal number of sightings," Garron said. "This year, we've had four sightings of adult harp seals in North Carolina, which we've never had before. We typically don't see them that far south."

Seals are common in waters off the northeastern New England states, where the most abundant type is the harbor seal, with a population estimated at about 100,000 the last time they were surveyed a decade ago. Gray seals are the second most common seal.

But those numbers are piddling compared to the number of harp seals found in the northwest Atlantic. Canada's Department of Fisheries and Oceans says 9 million of them can be found off Canada and Greenland.

A decade ago, harp seal sightings off Maine were rare, said Lynda Doughty, marine mammal stranding coordinator for the state Department of Marine Resources. The numbers have picked up the past few years, and this year there have been 40 documented sightings - more than double the number spotted last year.

The harp seals are typically spotted on nearshore ledges and in coves and harbors, but they have also turned up in parking lots and backyards - and one was found on an oceanside golf course in Scarborough. The seals spend much of their time on ice - they are one of several varieties of so-called ice seals - and have made their way onto land across the snow and ice along Maine's shores, she said.

For now, there is no clear explanation for why more seals are showing up in U.S. waters, said Gordon Waring, who heads the seal program at NOAA's fisheries science center in Woods Hole, Massachusetts.

They could be making their way south because of climatic conditions or perhaps in search of food, Waring said.

"These animals are known to wander a lot," Waring said. "Whether they're following food down or whatever, we don't really have a good understanding of it."

Garron said she and the seal organizations will look at environmental trends, such as water temperatures, to see if it's influencing the harp seal range.

Regardless of the reason, biologists are taking notice, Doughty said.

"We're all kind of raising our eyes," she said.