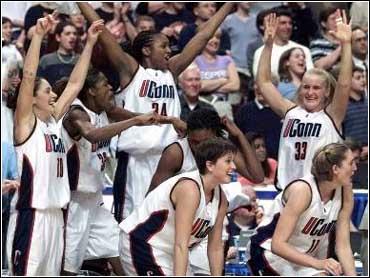 Connecticut had too much talent, too much depth and too many quick hands. And now the Huskies have something else as well: a second national championship.

With an impressive display of ball-hawking defense and efficient, balanced offense the foundation of UConn's play all season the Huskies overwhelmed Tennessee 71-52 Sunday night to win the women's NCAA title.

The top-ranked Huskies (36-1) beat No. 2 Tennessee for the second time in three meetings this season and did it in a way that left the Lady Vols (33-4) dazed and looking helpless.

"I thought if we could play 40 minutes of really solid basketball, we'd be all right," UConn coach Geno Auriemma said. "We did. Our defense was just spectacular tonight."

Tennessee was in the Final Four for the 12th time and was seeking its seventh national championship. But the Lady Vols could offer little more than token opposition to the UConn machine, which completed an impressive run through the NCAA tournament.

No one in the tournament came closer than 15 points to the Huskies, whose only loss was a 72-71 setback to Tennessee on Feb. 2.

"Our guards were not strong enough to handle the pressure defense they applied," Tennessee coach Pat Summitt said. "Offensively, they just schooled us even some of our veteran players."

Shea Ralph led the Huskies with 15 points on 7-of-8 shooting, and also had seven assists, six steals and one block. She was named the most valuable player in the Final Four.

Svetlana Abrosimova had 14 points and Asjha Jones 12 for Connecticut. The Huskies also got a big lift from Kelly Schumacher who had six points and had a Final Four-record nine blocks.

"Kelly Schumacher has really come up big the last part of the season," Auriemma said. "She knew she had to be a physical presence in the lane and that's where we won it, in the lane."

Connecticut kept sending fresh waves of substitutes into the game, and that eventually wore out Tennessee.

Tennessee had been averaging 80 points a game. It took the Lady Vols, who had four of their first five shots blocked, almost 13 minutes to even get 10 points in this one.

Ntional player of the year Tamika Catchings drew the brunt of Connecticut's defense as first Swin Cash, then Jones and Ralph took turns guarding her. Catchings got only one shot in the first 11 minutes and it was blocked. She finished with 16 points to lead the Lady Vols.

When it was over, Auriemma joined his players as they piled on top of each other at center court in celebration. They hoisted him and carried him briefly across the floor.

In the first title game matching the top two ranked teams since 1989, Connecticut asserted itself early by pushing the ball up the floor quickly and frustrating Tennessee with its traps and double teams on the defensive end.

The Huskies built a 15-point lead a little more than 12 minutes into the game, and Tennessee never found a way to get back in it.

The championship came five years to the day after Connecticut won its first title.

And for Auriemma, the brash, smooth-talking coach, the championship was all the more thrilling because it came in his backyard. Auriemma moved to this country with his family from Italy when he was 7 years old and grew up in the Philadelphia suburb of Norristown.

Auriemma also guided Connecticut to its other title in 1995, when the Huskies beat Tennessee 70-64 in Minneapolis to finish 35-0.

It's the third straight year and the eighth time overall that the team finishing No. 1 in the rankings has won the championship. The top-ranked team has never lost in the title game.

Tennessee played without starting guard Kristen Clement, an emotional leader and one of the team's most experienced players. Clement sprained her right ankle during practice Sunday morning, and despite undergoing a full day of treatment, she wasn't able to go.

Her absence deprived one of the players that Summitt had planned to rotate on Connecticut point guard Sue Bird to slow the Huskies' dynamic offense. Kyra Elzy, a strong defender, started in Clement's place and scored eight points.

Kara Lawson, the star of Tennessee's semifinal victory over Rutgers, was held to six points on 3-for-13 shooting.

With Connecticut contesting almost every shot, Tennessee started 1-for-13 from the field, yet trailed only 9-4. But when Jones hit a turnaround shot in the lane with 14:28 left, UConn took off.

A 12-2 run that included three baskets by Jones opened it up. When she hit another turnaround at the 7:49 mark, Connecticut led 21-6 and Tennessee had only two field goals and seven turnovers. That was not in Summitt's game plan.

Connecticut led by as many as 27 points and only a late rush saved Tennessee from a season-low point total.

Ralph set the tone defensively for the Huskies with her quick hands and scrappy play. At times, it seemed she was guarding everyone on the Tennessee team and came up with almost every loose ball. Once, she dove onto the floor tforce a jump ball that gave possession to UConn.

"We worked hard," Ralph said. "We came out with a vengeance. We deserve it."

It was 25-10 when Catchings gave Tennessee a brief spark. She got inside for a layup, then hit a 3-pointer to cut the lead to 25-15. Ralph answered by converting a three-point play on a shot she made while falling to the floor, and the Huskies led 32-19 at halftime.

There was still time for Tennessee to regroup, but Ralph and her teammates quickly dashed those hopes by starting to second half with an 8-0 run.

Ralph made a layup, then drove into the lane, jump stopped, faked once and banked the ball softly off the glass. Schumacher followed with a jumper and Ralph fired a two-handed overhead pass to Abrosimova for a wide-open layup.

That made it 40-19, and if it wasn't apparent before it was then: this one was going into the books for Connecticut.