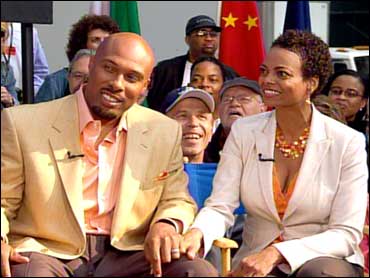 Married couple Uchenna and Joyce Agu started the last leg of the race in last place and with no money.

"It was hard. It was humiliating," Joyce tells The Early Show co-anchor Harry Smith, recalling their time at the Jamaica airport begging for money. "It was so devastating just to understand what it feels like to not have anything. And people looking at you like, you know, you're trash or you have some disease. And then, people didn't want to give us anything. I mean, it was just so hard. We want to tell them,' We're tax-paying citizens,' but we couldn't really say."

Well, those days are over. The couple received a $1 million check from show host Phil Keoghan Wednesday on The Early Show.. With part of the money, they plan to adopt if the fertility treatment does not work.

"Before the race began, we've gone through a lot," Uchenna tells co-anchor Rene Syler. "Layoffs and little financial deprivation there. Couples tend to really get at each other when there's some financial strife. And we got to pretty high levels of issues."

But Joyce notes that the show proved that when they have a common goal, they can work together.

"I let him handle his strength, and he allows me to handle my strength - strengths that he didn't know I had, I'm sure," she says.

It was at the Jamaican airport that Joyce was ready to give up, but the encouraging words from her husband put her back on track.

"I thought, this is it," Joyce says. "People are so rude to us. Nobody would give us any money, and I thought we were asking very kindly, but he just kept saying: We're not going to give up."

And with that they ended the hopes of former "Survivor" champs Rob Mariano and Amber Brkich's of conquering two separate reality shows. Rob and Amber were in the lead, already on a plane to Miami from Puerto Rico, when Uchenna and Joyce were once again begging. This time, they were pleading for the airline to put the jetway back on the full and about-to-depart plane for them.

"I think last night the difference was them turning the plane around to come back and pick up Uchenna and Joyce. If not, we were smooth sailing out of there," Rob says.

But when the jetway came back, Joyce says she thought she was going to faint. "We looked at each other, and we were like 'No way,'" Uchenna says.

Seventy-two thousand miles, 25 cities, and 5 continents and it all came down to a cigar store in Little Havana. With the help of a Spanish-speaking cab driver, Uchenna and Joyce arrived at the pit stop for their final clue.

"We're saying three kings," Joyce recalls, "And he goes, well, in Spanish, it's tres. And we're thinking, could it be? Would they be so tricky? I couldn't believe it."

For Rob and Amber it was "as the expression goes, close but no cigar," Rob says with a smile. "We were definitely confident throughout."

Amber notes to win they had to believe they could win all the time. "You have to go through the race with a confident attitude believing in yourself. That's how you get as far as you do. That's how we got to the end," she says.

Even if that means you become the unpopular team in the race. "A couple teams don't like us, but it's all right. We went out to run the race, and we happened to make some friends along the way," Amber says.

And the good news is that they are now married. Not such a happy ending for Ron Young and Kelly McCorkle who are now just friends.

Ron says, "When you travel together, it really does kind of break it all down. You see everything. Sometimes, it's not good"

About the fights they had while on the show, Kelly notes, " It's very stressful. I'm a human being. I'm not perfect. Things fly out sometimes."

And Ron says, "You're trying to get it done as fast as possible. If you took anybody's conversation like a little argument and took one sentence out of that to represent the entire argument, you get a totally different picture than you would listening to the whole thing."

So now the question is for Rob and Amber: Will we see them again in another reality show?

"When you go through something like that so traumatic, it's hard to find a balance. The only thing you want is justice," Michael Brown Sr. said in Louisville.