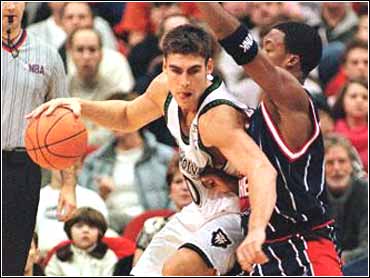 Terrell Brandon had an excuse for his and the Minnesota Timberwolves' poor start Monday.

"I'm used to sleeping at 2:30 in the afternoon, so it was tough to come out here on New Years' Day and play," Brandon said after scoring 12 of his 19 points in the fourth quarter of Minnesota's 106-96 victory over the Houston Rockets. "We were a little more consistent in the second half and showed that we weren't sleepwalking."

Kevin Garnett scored 21 points to lead the Timberwolves, who beat the Rockets for a sixth straight time despite the 30 points of Cuttino Mobley. Mobley had a career-high 33 points on Oct. 31, when the teams met in the season-opener.

"He's a great player," Minnesota guard Chauncey Billups said of Mobley. "If you can get to the basket and make your shot like he does, you can do that in this league. But it doesn't matter if he gets 160 if we win the game."

Wally Szczerbiak also had 19 points for the Timberwolves, who finished with a season-high 35 assists and a season-low eight turnovers.

"That's about as balanced an effort as you'll see," Minnesota coach Flip Saunders said. "We were able to use our bench and get guys some rest, which was very important."

Steve Francis, who fouled out with 6:12 to play, added 20 points for the Rockets. Francis got his fifth foul defending Garnett, thn immediately went after Brandon on a drive to the basket and was whistled again. It was only the second time this season he fouled out.

"I heard that he had five, so I asked Flip to let me try to get the sixth on him," Brandon said. "I didn't think it would come that fast, but I made a nice move and he bit on it."

The Rockets started the game with three straight 3-pointers and led by as many as eight points in the first quarter as Francis scored 10.

"Houston is an extremely tough team to defend because of their perimeter people," Saunders said. "I told our guys to just hang in there and keep playing for the easy shot. I was encouraged by the fact that we stayed hungry down the stretch."

"I'll take our chances with the shots we got," Houston coach Rudy Tomjanovich said. "We had a couple roll in and out and missed some layups and shots in the paint. It came down to shooting, and we just didn't make the shots I think we can make."

Szczerbiak had 10 points in the third quarter as Minnesota opened up a double-digit lead late in the period. But Mobley had 11 points in the quarter, including the five in the last minute, to keep the Rockets close. But they couldn't overcome the loss of Francis midway through the final quarter.

"That hurt," Tomjanovich said. "I was hoping he wouldn't get his sixth on a pick and roll. Instead of keeping himself in the game, he goes out on the next possession."

Mobley, who played the game in pain from an abscessed tooth, was 14-of-16 from the free throw line, the attempts a career-high.