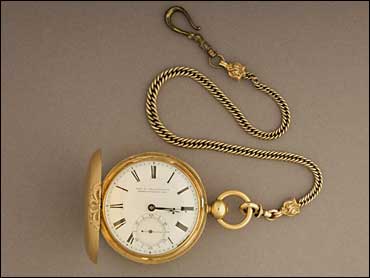 For nearly 150 years, a story has circulated about a hidden Civil War message engraved inside one of Abraham Lincoln's pocket watches. Now we know what it says.

On Tuesday at the National Museum of American History, a watchmaker used tiny tools to open the pocket watch and reveal the message left during repairs in 1861.

In a 1906 article in the paper, Dillon said he was moved to engrave a message after the first shots of the Civil War were fired in South Carolina.

In another find of Lincoln memorabilia, a collector believes a photograph from a private album of Civil War Gen. Ulysses S. Grant shows President Lincoln in front of the White House.

If so, it could be the last image taken of Lincoln before he was assassinated in 1865 - and it would be the only known photo of the 16th president in front of the executive mansion.

Only about 130 photos of Lincoln are known to exist.

Morgan helped identify Lincoln, who was born in Kentucky in 1809.

Although authenticating the 2½-by-3½-inch photo beyond a shadow of a doubt could be difficult, several historians say the evidence is compelling and believable.

Grant carefully removed the picture from the album and was shocked to see the handwritten inscription on the back: "Lincoln in front of the White House." Grant believes his great-grandfather, Jesse Grant, the general's youngest son, wrote the inscription.

Also included was the date 1865, the seal of photographer Henry F. Warren, and a government tax stamp that was issued for such photos to help the Civil War effort between 1864 and 1866.

In the photo it's not obvious to the naked eye. Five people can be seen standing in front of the executive mansion. A tall man's face is obscured, but zooming in on the image with a computer reveals a telling beard.

"Once you scan it and blow it up, you can see the whole scenario - there's a giant standing near the White House," Morgan said.

Morgan recalled the well-documented story of Warren's trip to Washington to photograph Lincoln after his second inauguration in March 1865. Lincoln was killed in April, so the photo could be the last one taken of him.

Warren, a commercial photographer from Massachusetts, enticed Lincoln into his frame shortly after the inauguration by taking pictures of young Tad Lincoln and asking the boy to bring his father along for a pose, according to the book, "Lincoln in Photographs: An Album of Every Known Pose," by Charles Hamilton and Lloyd Ostendorf.

"This is the first act of paparazzi ever toward a president," Morgan said. "Lincoln is not too happy at all." 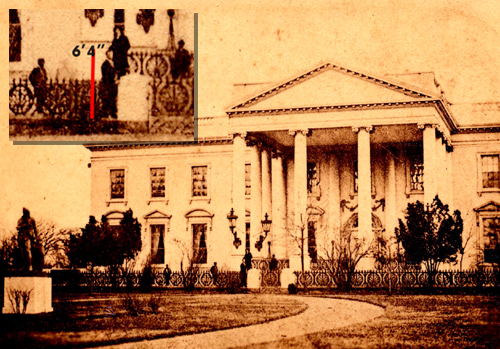 A March 6, 1865 photo by Henry F. Warren, believed to show President Abraham Lincoln in front of the White House. An inset detail reveals the 6'4" figure presumed to be Lincoln.