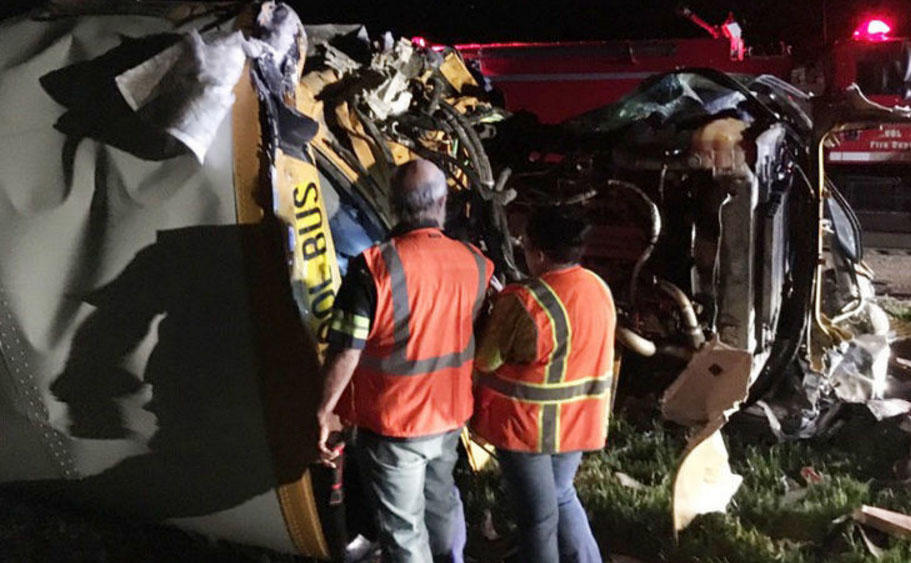 Two people were killed when a bus carrying a Texas high school boys track team back from a meet got into an accident with an 18-wheeler and a car Thursday night, officials say.

Mount Pleasant, Texas schools Superintendent Judd Marshall says two buses from Mount Pleasant High -- one carrying the boys team and the other the girls team – were returning from a competition in Paris, Texas when the collision occurred, in Talco, east of Dallas.

According to Marshall, the18-wheeler veered into oncoming traffic toward the boys team’s bus, which was being driven by a coach. He steered the bus toward a ditch to avoid head-on collision. But, says Marshall, the rig slammed into the side of the bus, making the bus roll over.

A car behind the bus carrying  a female assistant track coach hit the truck head-on, killing the truck driver and the assistant coach, Marshall says.

A coach on the bus was airlifted to a hospital where he underwent surgery and was stable but has more operations ahead, Marshall said.

A track team member was airlifted to the same hospital, but there was no word on his condition.

Approximately18-19 athletes were brought to three hospitals via ambulance. The extent of their injuries wasn’t known, but Marshall said pretty much everyone on the bus was shaken up or bloodied up.

There were about 33 athletes were on board, he added.

The bus with the girls team was a few miles behind when the accident happened, Marshall said.