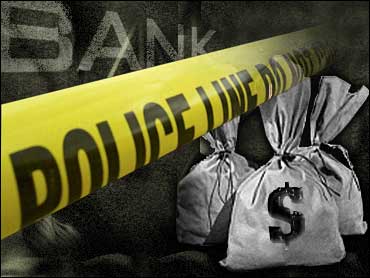 At least one gunman killed two bank tellers and wounded two others during a robbery Monday morning, and deputies wounded and captured a suspect who was walking out with a hostage, authorities said.

Daymond said the four bank employees were shot around 9 a.m., when the Wachovia bank branch opened. Wachovia spokeswoman Evelyn Mitchell said eight employees were inside; she was unsure if any customers were present.

The FBI spokesman said a deputy was driving by the bank when he saw a man coming out with a hostage. Deputies said the man was holding a gun to the head of a woman when he tripped, was shot and was captured.

The suspect, whose name was not immediately released, was taken to a hospital.

There was no immediate word on the condition of the two bank employees who were wounded, or on what transpired inside before the gunfire. There was also no word on whether any money was taken.

Matt Watkins, who was in a nearby pharmacy, said he heard three shots — "pop, then pop-pop" — and looked toward the bank parking lot, where he saw a man, apparently the wounded suspect, "flopping around." He said he also saw a big man running toward woods.

"There were never any security guards," he said.

Daymond had no physical description of the second suspect, but surveillance video cameras are visible outside the bank.

Yellow crime scene tape was stretched around the one-story bank on a highway at the edge of downtown Bessemer, about 15 miles southwest of Birmingham. Evidence markers were placed on the asphalt in the parking lot, and police investigators appeared to be concentrating on the main entrance.

Mitchell said bank officials were working with police and the FBI.

"It's a terrible day for Wachovia," Mitchell told The Birmingham News. "Our hearts are with our employees and their families right now."