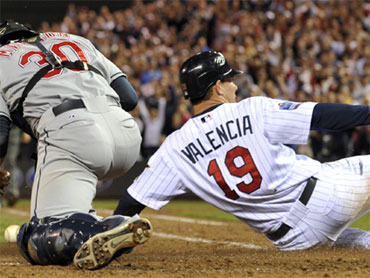 The Minnesota Twins clinched the AL Central title to become first team to qualify for postseason. They entered the game against Cleveland on Tuesday night with their magic number at two.

Even if they won, they said, they were all planning to head home to watch the conclusion of the Chicago White Sox and Athletics out in Oakland. Even if they clinched, manager Ron Gardenhire said, the celebration would have to wait.

Then came the latest thrilling, come-from-behind rally in a season full of them, and those plans were abruptly scratched.

Denard Span's RBI-single highlighted a four-run eighth inning to rally the Twins to a 6-4 victory over the Indians, reducing their magic number to one.

With the White Sox trailing 5-2 in the seventh inning, the Twins decided to hang around Target Field and watch the conclusion of the game in hopes of celebrating their sixth AL Central title in nine seasons.

"These guys aren't going to let me go home," said Gardenhire, who picked up career win No. 800.

The Twins trailed 4-2 in the eighth. Delmon Young had an RBI-double and pinch-hitter Jose Morales added the game-tying sacrifice fly before Span's single scored Danny Valencia for the lead. Orlando Hudson added an RBI-double to finish off the burst.

The Twins entered the game needing a win over Cleveland and a loss by the White Sox in Oakland to clinch the division.

"Tonight was a description of how this whole season has been for us," Span said. "Just playing resilient."

Justin Masterson (6-13) allowed three runs and three hits in two-thirds of an inning for the Indians.

Glen Perkins (1-1) pitched one scoreless inning for the win and Matt Capps picked up his 15th save for the Twins, who have played in a 163rd game in each of the last two seasons to determine the AL Central winner.

It doesn't look like they'll need that this time around.

Jim Thome hit a solo homer and Valencia had two hits and an RBI for the Twins, who were stymied by Indians starter Fausto Carmona for the first five innings.

The big lefty gave up the solo homer to Thome in the second inning, but was breezing through the Twins lineup for the second time in his last three starts before running into trouble in the sixth.

He walked Thome and gave up a single to Young before Valencia chased him with an RBI single to cut the deficit to 4-2. Carmona gave up two runs and six hits in 5 2-3 innings.

"They're a good team," Indians manager Manny Acta said. "It's not that they win when they have to win. They just win more than any other team in our division because they're good. They're deep and they're good."

Twins starter Scott Baker has been bothered by tendinitis in his pitching elbow for most of the second half of the season. He's taken two cortisone shots to try to ease the pain and had not pitched since leaving in the second inning of a start on Sept. 2.

Gardenhire planned to sprinkle him in down the stretch to give Francisco Liriano, Carl Pavano and Brian Duensing a few extra days' rest before the playoffs begin.

He was sharp in his return to the mound on Tuesday. He gave up two runs - one earned - and four hits with seven strikeouts and one walk in five innings.

If this is indeed the victory that clinches the title for the Twins, how appropriate. Nick Punto was inserted into the lineup 40 minutes before first pitch after starting shortstop J.J. Hardy had a migraine headache and Drew Butera filled in at catcher for Joe Mauer, who missed his second straight game with a sore left knee.

An MRI revealed no structural damage and the team was considering giving Mauer a cortisone shot, which would keep him out for four or five days.

It's been that way all season long for the Twins, who have overcome injury after injury during an impressive second-half surge to the top. All-Star closer Joe Nathan was lost for the year in spring training, All-Star first baseman Justin Morneau has been out for more than two months with a concussion and Hardy, second baseman Hudson, right fielder Jason Kubel and starters Baker and Kevin Slowey have all missed big chunks of time with various injuries.

"It's crazy to think how well we've done in the second half missing all the guys we have," Valencia said.

Michael Cuddyer moved from right field to first base to fill in for Morneau, Valencia emerged as the everyday third baseman, Capps was acquired as the closer and Duensing moved from the bullpen to the rotation to stabilize that group.

"We've had some guys step up and help us this year and it happens like that pretty much every year," Gardenhire said. "This organization does a good job of developing guys and getting them ready."

Travis Hafner and Drew Sutton had two hits and an RBI each for Cleveland.