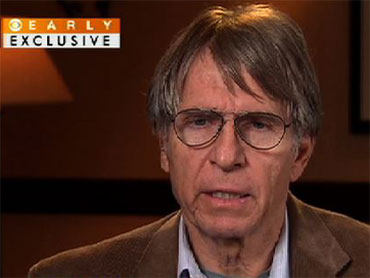 Eric Fuller was shot in Tucson Ariz. Saturday during the rampage Jared Loughner is accused of carrying out.

Fuller, 63, a military veteran, former limo driver and avid tennis player, is a strong supporter of Rep. Gabrielle Giffords, who was shot through the brain.

He cut a tennis game short Saturday so he could hear her speak, only to be shot in the leg and hit in the back with bullet fragments. He drove himself to the hospital and was released Monday.

The scene was, Fuller told co-anchor Chris Wragge, "like a bad crime drama, with a gun being pointed towards me, and a very, seemed like athletic young man pumping rounds off at everybody, and taking aim at us. So, not wanting to leave the world very soon, and not thinking that I could do very much except maybe get killed trying to stop him from the vantage point that I was at, I fell to the ground. As other people were doing. And expected the worst to occur after that."

"I felt the round enter my knee. I didn't know about the fragment in my back. I was incredulous. It was a dream-like sequence, a bad dream-like sequence. I -- I hadn't ever had any kind of trauma experience at that level before. And I didn't know -- I didn't quite know how to react. I felt like we were in for more, and possibly to be given a coup de grace by this madman that was so vigorously exercising his Second Amendment rights."

Fuller says he saw Patricia Maisch knock the clip out of the gunman's hand. "I think that was probably gonna to be intended as, I felt that was -- I sensed that that was going to be the end of me," Fuller told Wragge.

If he could, Fuller says he'd "give (Giffords) every kind of encouragement that I could possibly think of. And (he'd tell her) I would like to thank her on behalf of veterans such as myself, for standing up for veterans, and for supporting bills that were supportive of veterans, and I would want her to return to her job and continue to be effective in her role as -- as defending the public interest."