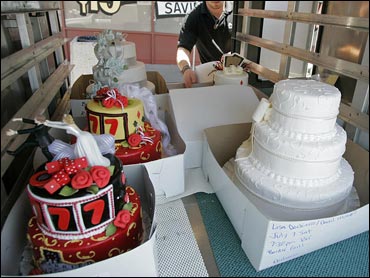 This past Saturday – 7/7/07 – is thought to have been the most popular wedding date in history. Because many people think seven is a lucky number, and three sevens is even luckier, an estimated 65,000 couples got married on the seventh day of the seventh month of the seventh year. I was lucky enough to be invited to one of those weddings. It's far too early to tell if the wedding I attended – or the tens of thousands that I wasn't invited to – will have any special magic attached to them. Will the "lucky number" of their anniversary help them to have a lucky marriage? As luck would have it, a study on successful marriages came out shortly before July 7th. However, the "lucky number feature" wasn't even listed among the top factors that people associate with a successful marriage.

Some people found religious or spiritual significance in 7/7/07, but, obviously, others got married on July 7, 2007 for superstitious reasons. To them, the number seven is a lucky number just as the number 13 is unlucky to them. Seven is known for all kinds of things: There are Seven Wonders of the World, seven colors of the rainbow, and my favorite -- seven openings in the human head.

But what happened to romance? Shouldn't people in love feel that any date on which they get married is lucky?

Getting back to this latest survey, it was conducted by the Pew Research Center. As I said, the wedding date didn't even make the list of things people thought were important to marriage. One of the most significant things to come out of the recent survey is that in the 1990 survey, children were considered the third most important factor in having a successful marriage. Now, children have fallen to Number 8. The entire list is, as follows:

Why do you think that "household chores" replaced "children" as Number Three? Are kids getting more difficult to handle? Or are more and more couples arguing over who should start their day by plowing the North 40?

It's a little disappointing that, with the exceptions of numbers one and two, romance seems to be unimportant to those surveyed. And there's no mention of listening to each other or mutual respect. The people who were surveyed obviously didn't have the attitude of "all you need is love." They were much more practical.

But even in the practical area, there are some glaring omissions from the list. In my opinion, in no meaningful order, they include:

So, like the Pew people, getting married on a "lucky" day doesn't even make my list for contributing to a successful marriage. I believe that if a couple is depending on a lucky number to ensure a good marriage, they're in trouble. But one group that has its corporate fingers on the pulse of America seemed to recognize the importance of a 7/7/07 wedding. Wal-Mart held a contest in which seven lucky winners got to have an all-expenses-paid wedding at their "closest Wal-Mart Super Center Lawn and Garden Area." Perhaps some couples felt that being near the fertilizer department would help their marriage grow.

I guess there are only two ways to find out if this number 7 thing will really mean anything to all these marriages. The first is to wait a while and then compare them to weddings held on "ordinary" days. The other way is that I would like to hear from people who were either married or attended a wedding on the previous 7/7/07 – July 7, 1907. If you fall into that category, please e-mail me and I will put a column together consisting of those e-mails. It's bound to be an interesting column, but it will probably be quite a bit shorter than this one.


Lloyd Garver has written for many television shows, ranging from "Sesame Street" to "Family Ties" to "Frasier." He has also read many books, some of them in hardcover. And he's married. Still.