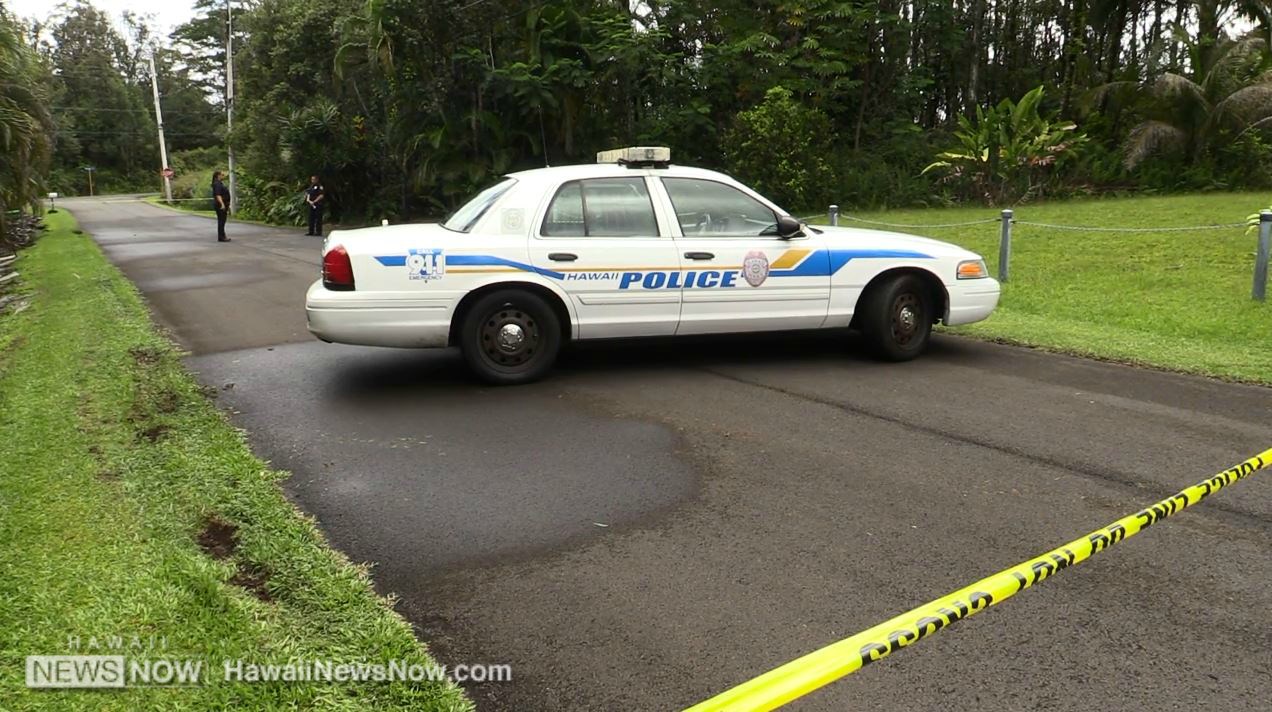 HONOLULU -- Blood dripped from a car as it pulled away from a home in a rural area of Hawaii's Big Island, leading officers to a woman's body stuffed inside the trunk and two children dead inside the house, authorities said Friday.

CBS affiliate KGMB reported John Ali Hoffman, 49, was arrested on suspicion of three counts of murder and a firearms offense. Though his relationship to the victims was not clear, it "looks like they were all living in the same house," police Capt. Robert Wagner said.

A relative said Hoffman had a wife and two young children -- a boy and a girl -- and was a caring person. One neighbor occasionally heard the couple fighting, but other nearby residents didn't know Hoffman.

Officers responded to a disturbance call in a subdivision in the rural Puna district around 1:30 a.m., spotting a man leaving a house and driving away in a car with its headlights off.

They pulled over Hoffman, saw a gun in the front seat and blood dripping from the trunk, police said. Officers opened it and found the woman's body.

In the house, they discovered the bodies of a boy and a girl, Wagner said. Police were trying to identify the victims.

Hoffman's sister-in-law, Marie Hoffman, was shocked to hear the allegations.

"That don't sound right," she said several times in a phone interview from Minneapolis.

She said she did not know much about John Hoffman's wife but that he is originally from St. Louis and moved to Hawaii about 20 years ago.

Marie Hoffman, who is married to his brother, described John Hoffman as the kind of man who takes care of people, especially children.

A man who lives next door to Hoffman told the Hawaii Tribune-Herald that he occasionally heard arguments coming from the home.

"I do know they were not a happy couple over there," Tim Mullins told the newspaper. "They would argue and fight, and I would hear it from time to time. But before it got too bad, it would quiet out."

Other residents said they did not know anyone with Hoffman's name in the subdivision, which has about 800 to 900 homes on one-acre or larger lots.

Police didn't disclose the exact address, but Hoffman's name is not listed as a property owner, said Richard Robbins, a Leilani Community Association board member. Robbins, who is in charge of enforcing association rules, said he has not heard of Hoffman.

Like much of the Puna district, the homes use rainwater catchment tanks and cesspools or septic tanks. A lot of residents rely on solar power and depending on the carrier, cellphone reception can be spotty, Robbins said.

It is the only Big Island subdivision with fully paved roads, spanning 21 miles, he said.

A triple homicide is rare, not only for the area, but for the entire island, police said.

"I can't remember having one before," Wagner, the police captain said. "It's definitely unique."

Some residents of the subdivision agreed.

"We have crime on the Big Island just like anyplace else," said resident John Rivera, who also did not know Hoffman. "But this is surprising, really surprising."