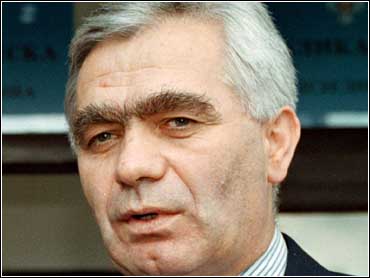 The very mention of the nature of the crimes sends a chill through one's body.

The International Criminal Tribunal for the Former Yugoslavia -- ICTY for short -- has been at work for nine years, investigating reports of these and other crimes and trying to assign blame to those responsible.

Based in the Netherlands at The Hague, the ICTY has publicly indicted 94 individuals accused of war crimes in the Balkans.

An unspecified number of others, like Momcilo Krajisnik, the head of the Bosnian Serb delegation at the 1995 Dayton Peace Talks, have been secretly indicted.

Krajisnik, a former close aide to the former leader of the Bosnian Serbs, Dr. Radovan Karadzic, was arrested this week and is now at The Hague, charged with crimes against humanity and genocide.

NATO's Secretary General George Robertson called Krajisnik "one of the most powerful and significant figures during the Bosnian War in the 1990s."

The U. S. government has offered to pay rewards for up to $5 million for information leading to their arrest and/or conviction by the ICTY.

NATO's Robertson says the arrest of Krajisnik sends a "powerful message" to the big three: "...they have to realize that the net is not going to stop closing until all of them have faced justice at the Hague," Robertson said in Washington.

Perhaps the most interesting aspect in this week's action is that it was carried out by French troops serving under NATO in Bosnia. The French have been the most reluctant of NATO allies in their pursuit of war criminals in the various sectors in Bosnia, according to a number of U. S. officials.

Though Krajisnik's arrest is not the first that French troops have been involved in, there has been a lot of criticism about their tepid approach, especially regarding Dr. Karadzic, who is believed to be living in their sector. To the extent the action taken by the French in the case of Krajisnik signals a change in their willingness to be more active, it could make for more sleepless nights for a number of those indicted, especially for Dr. Karadzic.

Certainly, the pursuit of those who are indicted is clearly of interest to the ICTY and to NATO troops in whose sector they may be hiding.

But bringing war criminals to justice also has a larger purpose, says Secretary of State Albright: "It's an important process and it's the way ultimately that collective guilt is expunged when individual guilt is assigned -- and their time will come."

For the record, there is no statute of limitations on war crimes.