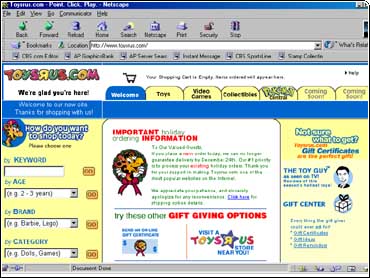 Toysrus.com is telling some of its customers they won't receive their orders by Christmas, leaving shoppers little time to pick up gifts in time for Christmas.

The latest stumble by the struggling online offshoot of one of the nation's premier toy stores has outraged consumers who now have to explain to their kids why presents aren't under the tree.

"What am I going to say to my daughter?" said Latrice Lyde, who said she is furious that the four games for her 4-year-old daughter will not come to her New York home by Christmas. "This is the first year she really believes in Santa and this is going to be so disappointing for her."

Toysrus.com began e-mailing shoppers late Tuesday that their purchases would not arrive, but said they would immediately be compensated for the inconvenience with $100 coupons that can be used in their stores.

That may not be enough to soothe frustrated customers and some now vow to never again buy at Toysrus.com.

The company would not provide specific numbers, saying only that late deliveries represent only a small percentage of its sales.

"Toysrus.com has become the poster child for holiday snafus," said Mike May, an analyst at the Internet research firm Jupiter Communications. "They've had misstep after misstep this holiday season and they are going to have a hard time making up for all of the mistakes."

While there are reports of other Internet merchants having problems this Christmas with customer service and fulfilling orders, Toysrus.com has had an especially stormy season.

Toysrus.com had promised shoppers that anything ordered prior to Dec. 11 would come in time for the holidays by standard delivery. Those ordering through Dec. 14 had to pay a premium for priority shipping but would get their gifts by Christmas, the company said.

But many of those who thought their orders were guaranteed got unwelcome news.

Lyde, for instance, made her purchase on Dec. 6. Like many others, she went to the Toysrus.com site because she trusted the brand name of Toys R Us, its corporate parent.

At the time she placed her order, she was informed the gifts would arrive as late as Wednesday. But nervous that her order status was not updated on the Web site, she called the company. A customer service representative ensured her everything would arrive in time.

Then at 10:05 on Tuesday night, an e-mail arrived telling her of the delay.

"If they couldn't handle the demand, they should have stopped taking orders," said Lyde, a single working mother. "Now, I have to scramble around with ime I don't really have to make up for their mistakes."

And the last-minute search for substitute gifts won't be easy. In addition to battling crowds finishing their shopping, the delay in deliveries comes at a time when many retailers already have run out of some of the season's most sought-after toys, such as Amazing Ally interactive dolls and Game Boy Color video game systems.

This is the second straight Christmas Toysrus.com has been plagued with problems.

Last year, it had problems keeping its Web site running and customer service woes. It lost business to online rival eToys. In response, it began a broad overhaul of the online store in 1999.

The site did improve. It looked better, it operated better, it even offered a better and wider array of merchandise, including some toys that couldn't be found anywhere else.

The company also spent millions on marketing and advertising to encourage shoppers to go online. One promotion promised free shipping in November, something most of its competitors were not offering.

Shoppers did flood the site. In fact, Toysrus.com averaged 1.75 million different visitors weekly from Nov. 22 to Dec. 12, keeping pace with eToys, which had 1.9 million visitors a week over the same period, according to New York-based research firm Media Metrix.

But Toysrus.com has been overwhelmed by its own success. For a number of weeks in November, the online toy store had to put a limit on how many people could visit the site at a given time to prevent it from crashing.

That forced the company to scramble to add computer power during a very busy part of the holiday season so shoppers weren't shut out.

While the computer problem was fixed, they now are facing another nightmare with the delivery glitch. In addition, many shoppers complain their customer service has been less-than-satisfactory and they feel misled.

By Rachel Beck
©1999 The Associated Press. All Rights Reserved. This material may not be published, broadcast, rewritten, or redistributed