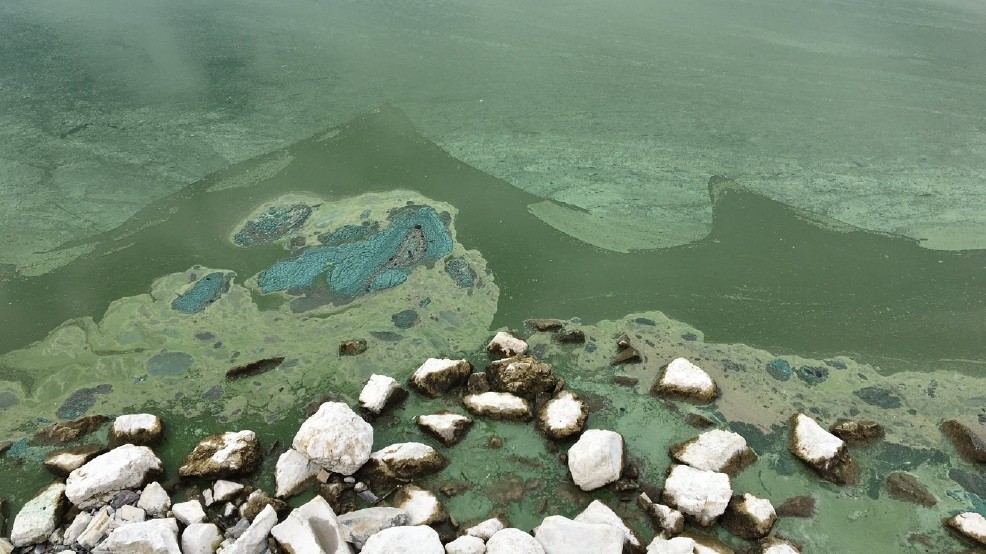 SPANISH FORK, Utah -- A huge toxic algae bloom in Utah has closed one of the largest freshwater lakes west of the Mississippi River, sickening more than 100 people and leaving farmers scrambling for clean water during some of the hottest days of the year.

The bacteria commonly known as blue-green algae has spread rapidly to cover almost all of 150-square-mile Utah Lake, turning the water bright, anti-freeze green with a pea soup texture and leaving scummy foam along the shore.

"It smells like something is rotting," said Jason Garrett, water quality director for the Utah County Health Department. "We don't have an idea of how long this event will last."

Toxic algae is a problem around the country. An enormous outbreak in Florida is now fouling beaches on the Atlantic coast, and a 2014 outbreak at Lake Erie left more than 400,000 people in the Toledo area without tap water for two days.

Utah Lake doesn't provide drinking water, but its closure is causing big problems for people who use the lake for swimming, fishing and other activities and for farmers with thirsty crops.

Utah Poison Control says it has fielded hundreds of calls related to the bloom, including some 130 involving people who have reported vomiting, diarrhea, headache and rashes.

The contamination has now spread to the Jordan River, which supplies irrigation to dozens of farmers around Salt Lake City, about 45 miles north of the lake. The problem has occurred amid days of triple-digit temperatures as growers prepare for farmers markets and try to nurture crops such as corn and fruit trees at key points in their development.

"We've spent hundreds of thousands of dollars on this crop, maxed out every dollar we have," said Luke Petersen, who farms about 100 acres of tomatoes, summer squash and other produce in Riverton. "We're real worried about it."

Meanwhile, the Bonneville School of Sailing has had to cancel more than a dozen groups since the lake was closed.

"This will be a real hit," said co-owner Todd Frye. He loves the mountain-rimmed lake and has worked to change the decades-old perception that it's murky and polluted. New efforts to clean out bottom-feeding carp are improving the water quality, but he worries the algae bloom will be a blow to its image.

The lake is largely fed by treated wastewater as well as agricultural runoff, said Erica Gaddis, assistant director for the Utah Division of Water Quality.

Longstanding drought conditions have made the water especially low and stagnant. Combine that with hot summer weather and Utah Lake became a perfect petri dish for the cyanobacteria.

There are chemical and biological treatments for the problem, but using them on such a large bloom would be unprecedented and possibly harmful, Gaddis said.

For now, authorities are waiting for the bloom to run its course and clear, hopefully aided by a drop in temperatures or a storm that could stir up the water and reduce stagnation.

One bit of good news is that early test results indicate levels of dangerous toxins produced by the bacteria may not be as high as feared, though the state is still waiting for more data.

To stave off new blooms in coming years, the state is looking to reduce the levels of toxic algae-feeding phosphorous and nitrogen in wastewater that's pumped into the lake. That could be difficult, however, because cities served by those plants include some of the fastest-growing in the country.

"We've been loading the Utah Lake in one form or another for 150 years, and it's catching up with us," Gaddis said.