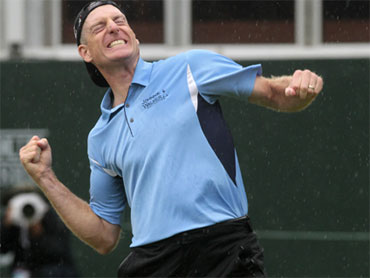 The biggest shot of his career gave Jim Furyk the biggest payoff in golf.

Clinging to a one-shot lead, with a $10 million bonus riding on the outcome, Furyk nearly holed a bunker shot and knocked in the 2½-foot par putt he had left to win the Tour Championship and capture a FedEx Cup that came down to the very last hole Sunday.

Furyk closed with an even-par 70 for a one-shot victory over Luke Donald in a steady rain at East Lake.

Donald, who chipped in from 100 feet for birdie on the 17th hole to keep his hopes alive, was waiting in the scoring trailer when Furyk hit his hybrid on the 230-yard closing hole into the bunker. A bogey would mean a sudden-death playoff to decide the FedEx Cup.

It was the 16th career victory for Furyk, but none that ended like this.

When he rapped in his short par putt with his hat turned backward, he plucked the ball out of the cup, just like always. Then, he dropped his putter and turned toward the grandstand with a powerful thrust of his fist and screamed with delight.

Furyk earned $1.35 million for winning the tournament, and $10 million from the FedEx Cup. He moves to No. 5 in the world ranking.

In its fourth year, it was by far the most riveting finale of the FedEx Cup. With an hour to go, the five players who had a chance to win the cup included Nick Watney, who started the week as the No. 28 seed in a 30-man field.

It was all in Furyk's hands when he birdied the 15th to build a three-shot lead, and Paul Casey bogeyed the 17th hole ahead of him. But Furyk had to scramble for bogey on the 16th, couldn't reach the green on the 17th and made another bogey as he watched his lead slip to a single shot playing one of the toughest holes at East Lake.

The sand shot could pay off in more ways than a big bonus. It was the third victory of the year for Furyk, which could be enough for him to be voted PGA Tour player of the year. No one else has won more than twice.

The $10 million should at least help buy the greatest alarm clock ever made.

Furyk was the No. 3 seed when the playoffs began, but was disqualified from the opener when he missed his pro-am time at The Barclays because the battery died in his cell phone, which he used for an alarm.

In the end, Furyk joined Tiger Woods as the only FedEx Cup champions to miss the first playoff event - Woods in 2007 because he didn't want to play, Furyk this year because he couldn't.

Furyk finished at 8 under to become the first player to be outside the top 10 in the standings at the Tour Championship to win. Matt Kuchar, the No. 1 seed, shot a 71 and tied for 25th. This Sunday was so bizarre that Kuchar still had a chance to win the FedEx Cup.

Kuchar wound up second in the FedEx Cup and earns a $3 million bonus. Donald, who closed with a 70, moved up to third in the standings and picked up an extra $2 million.

Retief Goosen also had a chance at East Lake until a bogey on the 17th. He shot a 71 and finished alone in third at the Tour Championship. Watney (67) and Casey (69) tied for fourth.

The celebration was dampened by a two-hour rain delay that sent most of the fans home from East Lake. For those who stayed, it was tough to applaud with one hand on the umbrella as the rain pounded the players over the final hour of competition.

Even so, a FedEx Cup finale has never had so many possibilities, so much movement.

Watney wasn't even a remote candidate when he went into the weekend tied for 25th in the 30-man field, 13 shots out of the lead. Then came a 63 in the third round, and he kept right on going. Watney shot a 28 on the back nine Saturday, then had a 30 on the front nine Sunday to pull within one shot of the lead.

Even as the 28th seed, Watney could have won the FedEx Cup with a victory at East Lake, provided top-seeded Matt Kuchar did not finish alone in 25th. Kuchar missed a 7-foot par putt on the final hole. He wound up in a two-way for 25th.

That became irrelevant when Watney failed to birdie the par-5 15th and made his first bogey of the round on the 16th.

Furyk took the lead for good on the fourth hole, and really showed his mettle at the start of the back nine. He saved par with a 6-foot putt on the 10th hole, made a 15-foot birdie on the 11th and escaped big trouble on the 12th when he pulled his tee shot into the trees. He got his next shot into the front bunker, blasted out to 4 feet and walked off with a par.

With the rain at its heaviest, he drilled a hybrid onto the green at the 15th and two-putted for birdie, giving him a three-shot lead. Then came the back-to-back bogeys, turning the final hole of the tournament - and the FedEx Cup - into a nail-biter.

Winning the Tour Championship was important in its own right - it's the first time Furyk has won three tournaments in a year.

But even with a three-shot lead, the FedEx Cup remained in doubt.

Casey, who has not won a tournament all year, could have claimed the $10 million bonus by finishing alone in second place. Casey was at 6 under - one shot behind Goosen in second - when he hit his approach toward the corporate tents on the 17th. After a free drop, he hit a wedge to just outside 5 feet and badly missed the putt.

Furyk has no time to celebrate. He was to join his teammates on a charter flight to Wales on Sunday night with another cup to try to win - the Ryder Cup - this one worth no money at all.