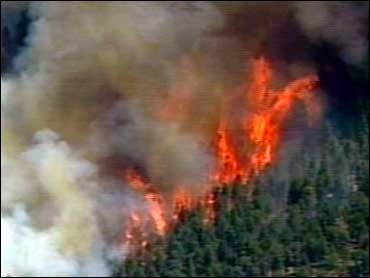 Imagine a firefighter with a secret passion for setting fires, who ends up burning down his own firehouse. Sadly, it is a true story, Dan Rather first reported on Nov. 20, 2002.

Volunteer firefighter Douglas Ford's case is certainly exceptional. But his kind of problem is not unheard of.

You've probably heard of firefighters being arrested for arson. It happens more than you might imagine. The vast majority of those arrests are among the ranks of volunteers.

These arsonists represent the dark side of a public service we have come to revere more than ever since Sept. 11.

But in some communities, the trust between the public and its firefighters has been broken.

"I set the fire at the fire station. I burned it down. I can't say any more than that. I'm sorry for what I did," Ford says. He had been a volunteer firefighter for 12 years with two Ohio departments.

His career ended in February 2000 when he set a massive blaze that destroyed his firehouse and everything in it. Today, he is serving a five-year sentence in a state prison.

Why did he do it? "I think the plain just...excitement of seeing the fire, realizing it's dangerous, but the excitement of the flame itself," he says.

Ford admitted that at 15, he set fire to a neighbor's car and garage. He denied he had set any other fires. Then slowly, he admitted to more.

Police say Douglas Ford is a suspect in many unexplained fires. Ultimately, he was convicted on only two counts of arson. No other cases were brought to trial.

That's not that unusual. Arson is a notoriously tough crime to trace and prosecute. Of 76,000 suspicious fires reported nationwide in 1998, only 16 percent resulted in arrest. And only two percent of those cases ended in conviction.

There is no way to know how many of those fires involved firefighters. But the headlines raise serious questions:

"The damage they do in one fire can be enormous. I mean it can be a calamity, just one crime," says author Joseph Wambaugh. In his latest book, "Fire Lover: A True Story," Wambaugh profiles John Orr, a walking worst-case scenario for any fire department.

Orr headed a large California arson squad, and had a reputation for uncanny instincts about how an arson fire had started. It turned out that in many cases, it wasn't instinct at all. It was inside knowledge. Orr had set the fires.

Investigators suspect he may have set as many as 2000 fires, killing four people in the process and earning a life sentence in prison.

"I could not have written this book as fiction, because no one would publish a book where the homicide detective turns out to be the serial killer everyone's looking for. But that's exactly what happened in this case," Wambaugh says.

As background for his book, Wambaugh studied arson in general, and firefighters who commit arson in particular.

"It's power and control. They've not only created a living thing, they've created a living thing that is the object of massive attention," says Wambaugh. "There are fire engines and people and screaming and all of that. He's created this massive event that he can relive over and over until he has a need to do it again."

The best firefighters are fascinated with fire: Their careers are case studies in how to outsmart fire.

"It's what I refer to as our dirty little secret," says Tom Aurnhammer, fire chief in Farmington, N.M. A fifth-generation firefighter, he is speaking out in hope of doing something to stop arson within fire department ranks across the country.

"I think part of the problem lies in some of the smaller rural departments that are starved for help, and maybe if they [have] somebody that steps forward, that wants to volunteer, they're glad to have the person and may not take a close look at their background."

He is in favor of stronger background checks, but particularly with volunteer and rural departments."

Ken Cabe has been asking questions about firefighter arson for much of the past decade in his job with the South Carolina State Forestry Commission. He became curious about exactly who was setting the state's arson fires.

"Most states don't record the arson events that are caused by firefighters any more than they would set aside the ones that were caused by plumbers or carpenters or whatever," says Cabe.

"We had perhaps hundreds of fires because people who set fires very seldom set just one. We're talking about a serial arson phenomenon here," Cabe says.

He drew up a profile of a firefighter who becomes an arsonist.

"We found generally that these were young white men from ages 17 up to mid-20s. They were folks of average to above average intelligence but maybe didn't do too well in academic endeavors. We found that a lot of these young men didn't have an awful lot in their lives to distinguish them except for their association with the fire service. They were highly motivated, they were highly trained and maybe the alarm didn't go off often enough for them," says Cabe.

Cabe and South Carolina's fire professionals decided they had to do something to fight arson among their departments.

The state fire commission began with a warning to all firefighters that even the smallest act of arson would not be tolerated. And firefighters were put on notice that penalties for any slip-ups would be severe. The centerpiece of the program was the most basic and the most obvious. The state barred anyone with a criminal record from becoming a firefighter.

After a year, the new program had worked beyond its designers' wildest dreams. "The following year, we had only three arrested in the entire state of South Carolina. So we went from averaging 30 something a year to three. That's phenomenal," Cabe says.

These are the most fundamental questions to ask any potential firefighter: Who are you? Why do you want to do this? Can you be trusted? In too many fire departments, especially among volunteers, those questions are never asked.

Ford, for one, says that when he applied for his firefighter jobs, no one asked him if he had ever set any fires.