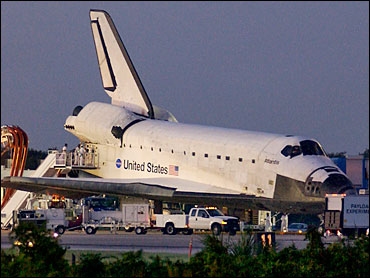 NASA workers inspecting space shuttle Atlantis this week discovered that a tiny piece of space debris had punched a hole in a radiator panel during the shuttle's recent mission, but officials said the damage never endangered the crew.

The first reports said nothing hit Atlantis in flight, but now, NASA says a micro-meteoroid struck a radiator panel and caused a hole about a tenth of an inch wide, reports CBS News correspondent Peter King.

The debris struck a panel that extends from payload bay doors on the shuttle. The object did not hit the sensitive tiles or thermal panels that help protect the shuttle when it returns to Earth.

The damage "didn't endanger the spacecraft or the crew, nor did it affect mission operations," NASA said.

So why wasn't it found during one of the three detailed inspections in space during the mission? King reports NASA says it was in a spot that's not exposed to the fiery reentry, and the inspections focused on the areas that were, such as the shuttle's heat shield, which checked out fine.

The radiators were brought inside the bay before the shuttle's landing last month.

In 2003, space shuttle Columbia broke apart during re-entry when superheated gases entered a hole in the shuttle's wing. A breakaway chunk of hard foam from Columbia's external fuel tank had punctured that wing during liftoff. After the Columbia disaster, NASA began intense inspections of the shuttle, both by camera during liftoff and by the astronauts once in space.

Otherwise, Atlantis' land Sept. 21 was a graceful ending to a strange flight, reports CBS News correspondent Bob Orr. First there was trouble getting off the ground — launch was delayed four times, twice by weather and twice by technical glitches — and then more trouble coming home. Several objects seen floating near the orbiter after it left the space station.